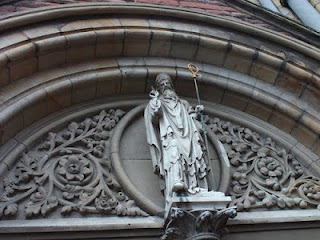 Last week I pointed out that Sunday World journalist Richard Sullivan had got his facts wrong in relation to a 'stature' (sic) above the door of St Patrick's Roman Catholic Church in Donegall Street.  He had stated that it was a statue of the Virgin Mary but as I pointed out it would have been the first statue of Mary with a long flowing beard and a bishop's mitre!  It is of course a statue of St Patrick, after whom the church is named.
In a rather desperate and confused response Richard Sullivan comes back this week claiming that he has 'touched a raw nerve' with his article.  However I would suggest that it was my comments about 'shoddy journalism' which 'touched a raw nerve' with Richard.
He certainly seems to have got himself even more confused and says that my original post was an 'apparent appeasement' of the actions of a flute band.  I don't know what he is trying to say but 'appeasement' is certainly the wrong word.  It seems to be a case of why use a short word when you can use a big word and then use the wrong big word!  In fact my original post was written to correct a series of factual errors in an earlier newspaper article by another journalist.  I acknowledged that the action of the band had been naive and thoughtless but I also pointed out that the journalist had rather embellished the story by her errors.

However, back to Richard's latest article and he really is having difficulty with the statue outside St Patrick's.  He states that in my response I 'delivered a lecture about the sandstone with which the church is built'.  In fact I never mentioned the sandstone of which the church is built, I merely referred to the statue of St Patrick and noted in passing that it was carved from Portland stone.  He seems not to know that Portland stone is actually a type of limestone not sandstone.  It is the same stone that was used for the City Hall and St Anne's Cathedral and is easily recognised by the white colour of the limestone as opposed to the red of the sandstone.  The church was built of sandstone and the statue was carved from limestone.
So where does that leave us?  (1) Richard omits to acknowledge the errors he made in his column last week and which I corrected, (2) he compounds these errors with more errors, and (3) all of this arises from an article in which I pointed out five factual errors by another jouranlist.  Is it any wonder that I wrote about 'shoddy journalism'?
Posted by Nelson McCausland MLA at 23:55