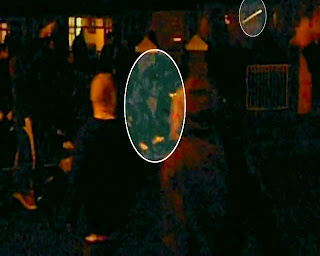 A report in the Irish News (28 July) provides more information on the activities of dissident republicans at Ardoyne on the night of 12 July.
Oglaigh na hEireann (ONH) emerged in 2009 as a dissident Irish republican terrorist organisation.  Now, using a recognised code-word, it has issued a statement claiming responsibility for the attack on police officers in which a masked gunman fired 17 shots from an assault rifle.
The group also claimed that previously unreported shots were fired at police lines from a handgun and that seven blast bombs were thrown during the disturbances.
Some of the initial reports in the media referred to 10 shots being fired at police officers but that was increased to 17 when a video clip of the gunman was placed on you-tube.  However until now there has been no mention of a second republican gunman.
There has been passing mention of blast bombs but this statement is quite explicit, referring to seven blast bombs being thrown by dissident republicans.
Earlier this year the same dissident terrorist group claimed responsibility for a booby-trap bomb attack on an off-duty soldier at Ligoniel.
Posted by Nelson McCausland MLA at 12:11