Dissident republicans have daubed sectarian graffiti on Greencastle Orange Hall in North Belfast.  This is the latest in a long series of such attacks, stretching back many years.
The attackers also daubed anti-Sinn Fein graffiti on a nearby wall, with the message directed against Martin McGuinness for shaking hands with Her Majesty the Queen. 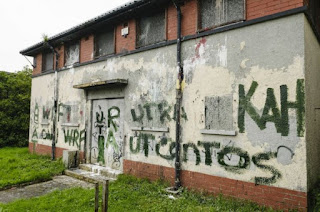 This latest attack on the Greencastle Hall shows the depth of the sectarian bigotry that still exists in some sections of our society.  We have come a long way but there is still a long way to go.
Today Drew Nelson, Grand Scretary of the Grand Orange Lodge of Ireland, was in Dublin, addressing the Senate, and one of the issues he raised was the litany of attacks on Orange Halls in Northern Ireland and the Irish Republic.
The picture above is a damning indictment of the sectarian intolerance of dissident republicanism.
Posted by Nelson McCausland MLA at 16:51