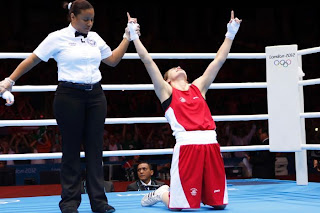 Katie Taylor has won a gold medal for Team Ireland in the Olympic Games.
This is the first time that women's boxing has been included in the Olympics and she won the gold medal in the women's lightweight, 60 kg, division.  She is also the world female boxing champion as well as representing the Republic of Ireland at football.  The Taylor family live in Bray and Katie is a member of Bray boxing club.
The 26-year-old Katie is unusual in the world of boxing in that she is a born-again Christian.  Her mother Brigid, who was brought up as a Roman Catholic, was saved first and became a born-again Christian.  The rest of the family were then converted - Katie, her two brothers and sister, and her father David.  For the past eight years the family have been members of St Mark's Family Worship Centre in Pearse Street in the centre of Dublin.  This is a Pentecostal church, part of the Assemblies of God, and the pastor is Sean Mullarkey.

Katie Taylor's faith is central to her life and she is well-known for pointing heavenward after a bout and praising God for being her strength and her shield.  Her favourite Bible passage is Psalm 18.
Katie is a wonderful ambassador for Jesus Christ and I was interested to hear on Radio Ulster another boxer speak of the impression that Katie had made on her by her lifestyle.  Her success in the boxing ring provides a great opportunity for her to share her faith in the Lord Jesus Christ.
Posted by Nelson McCausland MLA at 11:28