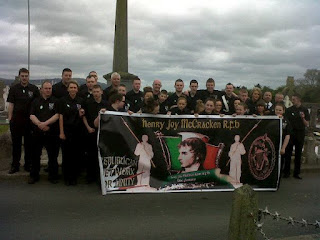 On Sunday afternoon the Henry Joy McCracken Republican flute Band is holding a parade around the New Lodge and then up Clifton Street to Henry Place and the Clifton Street cemetery, where it is believed by soome people that Henry Joy McCracken was reburied.
The event is advertised on http://ardoynerepublican.blogspot.co.uk and the post features a photograph of the band holding a banner with the name of the band and the name of the Republican Network for Unity.
It also includes a photograph of the blogger, Martin Og Meehan, speaking 'at last year's commemoration', which was organised by the Republican Network for Unity.
However there is a very significant difference between the event they organised last year and the one they have organised this year.  The event last year was to commmemorate both Henry Joy McCracken and William Drennan, who were both members of the Society of United Irishmen.  The event this year has omitted Drennan and is limited to a commemoration of McCracken.
That may or may not be connected to something which I have posted about on several occasions in the past and which I have repeated in my last post.  This is the fact that Dr William Drennan, who wrote a prospectus for the Society of United Irishmen and sought the abolition of a corrupt Anglo-Irish parliament in Dublin, later changed his politicial stance on the Union.
In a speech delivered at a town meeting in Belfast in 1817 Drennan said, 'that, in the event of a full, free and frequent representation of the people in Parliament for the whole empire he would be re4conciled to the Union.  he would not unwillingly merge his country in a fair and faithful representation of these realms.' [Northern Whig 3 November 1893]
Even more interesting is the following statement by William Drennan in the Belfast Penny Magazine (31 December 1811), when he wrote, 'Be Britons with all your souls - and forget that your father called himself an Irishman.'
In 1891, the centenary of the founding of the Society of United Irishmen, Irish nationalists and republicans tried to lay claim to Drennan.  however they were answered by his son John Swanwick Drennan (1809-1893), who was a poet like his father but a poet of Ulster Unionism.  The same thing happened in 1897 and this time they were answered by Drennan's grand-daughter, Mrs Maria Duffin, who said of him, 'Dr Drennan was at first opposed to the Union but afterwards modified his view of it.'
The fact that Drennan changed his position is often ignored by nationalists and republicans, or else they are simply ignorant of the fact.  On a previous occasion I pointed this out when Fianna Fail formed a branch at Queen's University and named it after William Drennan.
Moreover Drennan was not a single exception.  Many of the United Irishmen in Ulster, both the leaders and the rank and file, became supporters of the Union.  They became Liberals and in due course, when Gladstone espoused home rule, they became Liberal Unionists, ultimately merging with the Conservative Unionists and the Orange Order to form the Ulster Unionist Council.
I can understand, therefore, why Martin Og Meehan has dropped Dr William Drennan from this year's commemoration.
.

Posted by Nelson McCausland MLA at 10:50