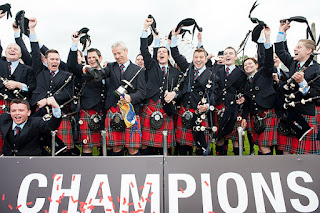 Today the World Pipe Band Championships were held in Glasgow with 234 pipe bands taking part.    The annual competition is organised by the Royal Scottish Pipe Band Association, which is the world governing body of piping and drumming.
Northern Ireland has a very strong pipe band sector and there are more pipe bands per head of the population in Northern Ireland than there are in Scotland.  As a result Northern Ireland bands and drum majors generally perform extremely well in the competition and this year was no exception.
The Field Marshal Montgomery Pipe Band won the grade 1 competition, making them the best band in the world.  Moreover they won the championships last year and altogether they have notched up eight grade 1 championship titles.  This is a truly international event with bands competing from twelve countries and Scottish Power were second while the magnificent Simon Fraser University Pipe Band from Canada came third.
The Field Marshal Montgomery band was form in 1945 and was named in honour of a great Ulsterman, Field Marshal Viscount Montgomery of Alamein.
There is real depth in the pipe band world and Northern Ireland bands, Ballybriest and Clogher, also came first in two of the lower grades, with Northern Ireland drum majors taking three world titles.
This is a magnificent achievement by the pipe band movement in Northern Ireland.  There are few art forms where Northern Ireland practititioners can claim to be the very best in the whole world but this is one and possibly the only one.
It will be interesting to see what coverage is given to this success by the local media and I mean more than a few sentences on teletext, a 30 second slot in the news or a short column on page 23 of a newspaper..  This will be a test of the cultural inclusivity of our local media.  A world champion from Northern Ireland is the equivalent of an Olympic gold medal and that's how it should be treated and celebrated in all the local media.
Moreover we have six champions to celebrate.  So congratulations to the Field Marshal and the other bands and drum majors .....  and now its over to the media.
Posted by Nelson McCausland MLA at 15:10