In an earlier post I referred to the fact that the SDLP was born out of a campaign that employed civil disobedience and the new party continued to employ that tactic. 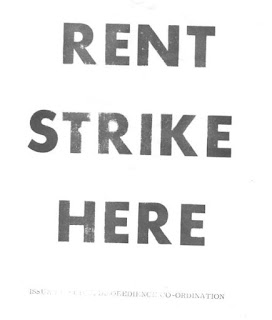 There is a helpful reference to this in Identity, Ideology and Conflict: The Structuration of Politics in Northern Ireland by Dr John Daniel Cash (p 158), which was published by Cambridge University Press in 1996:

This policy of internment drew hostile responses from both the SDLP and the Provisionals. ... [The SDLP] constructed their campaign of dissent in liberal forms.  Continuing to advocate non-violence, they extended the civil disobedience campaign which they had renewed after their withdrawal from Stormont in July.  In the following terms they called on civil servants to resign and announced a 'rent and rates' strike against local government institutions:

We call on all who hold public positions in Northern Ireland, whether elected or appointed, to express their opposition by immediately withdrawing from those positions and to announce their withdrawal publicly and without delay ...  We call on the general public to participate in this protest by immediately withholding all rent and rates.  We expect one hundred per cent support from all opponents of internment.

In view of recent comments by SDLP leader Alasdair McDonnell is he now prepared to condemn the campaign of civil disobedience initiated by its founding fathers in 1971?

Posted by Nelson McCausland MLA at 23:52