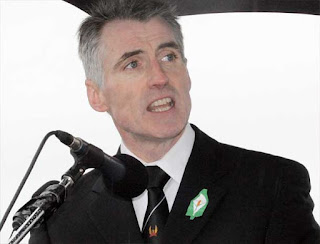 Last Friday Ruarai, a blogger on Slugger O'Toole, commented:
I've never subscribed to the 'two Irelands' or 'two nations' theory in Irish politics but Scottish Nationalists be forewarned, it could be coming your way soon.

Therein lies one of the contradictions of nationalism in the British Isles and it is a contradiction between Irish nationalism, Scottish nationalism and Welsh nationalism. Irish nationalists have generally taken the view that because there is an island called Ireland there is also a nation called Ireland. For them, one island means one nation.
However Scottish and Welsh nationalists disagree with that position. There is an island called Great Britain but on that one island, they argue, there are several nations, England, Scotland and Wales. Some even argue for a separate Cornish nation but they all agree that one island does not automatically mean one nation.
Irish, Scottish and Welsh nationalists often describe themselves as the 'Celtic nations' so this is very much a family disagreement, although there is generally a polite silence about it.
Recently Declan Kearney of Sinn Fein has been talking about 'national reconciliation', which seems to be a euphemism for 'national unification,' and of course for Sinn Fein the 'nation' is a 32-county nation. Sinn Fein and other Irish nationalists are still founded and fixated on the principle of 'one island means one nation'.
Moreover they believe that the nation should find expression in an independent state.

Kearney may attempt to dress it up in new language but there is nothing new in what he says. For him it is still, one island, one nation, one state.
Posted by Nelson McCausland MLA at 01:31