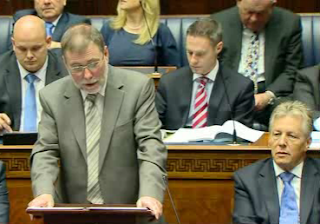 I deal with a range of issues in my department, including housing, neighbourhood renewal, town centre regeneration and the voluntary and community sector, and I am taking forward initiatives in all these areas but undoubtedly welfare reform has been right up there at the top of my work programme.  That has been the case for some time and will remain so well into next year.  The impact of wefare reform will be felt by people right across Northern Ireland and we in the Assembly must do all that we can to shape welfare reform in a way that will best take account of the particular circumstances of the province.
We are bound by the broad principle of parity - that people in Northern Ireland are entitled to the same benfits as people in the rest of the United Kingdom - and that is something that I will return to on another occasion, but there is some room for flexibility and right from the start I identified three key flexibilities that I wanted - the possibility of direct payment of housing benefit to landlords, the possibility of split payments as opposed to single household payments and the possibility of fortnightly as opposed to monthly payments.
All the main political parties in the Northern Ireland Executive are represented on the Executive sub-committee on welfare reform and all were agreed that these were key issues.  Moreover all of the stakeholder groups said the same thing.
However those flexibilities require that they be incorporated into the IT system what will deliver the new benefit system and that IT system is being developed by the Department forWork and Pensions at Westminster (DWP).  I have therefore devoted a lot of time and energy to negotiating with DWP and in particular with Ian Duncan Smith MP and Lord Freud, to secure those flexibilities.  There have been many meetings and conversations as well as correspondence and officials in my department have also been in regular contact, indeed almost daily contact, with officials in DWP.
It has taken a lot of my time and indeed for several weeks there I did not post anything on this blog, simply because I didn't have the time.
However as a result of those negotiations I was able to secure the flexibilities that I wanted and that has been good news for Northern Ireland.
When I announced it to the Assembly I was congratulated by all the political parties, probably the first time that has happened!  There was also a warm welcome from stakeholders and interest groups.  I was interested in particular to see what some of the independent experts in the field have said and looking through press cuttings and radio and television transcripts I picked out the interview that Linda McAuley had with Professor Eileen Evason on the Radio Ulster consumer programme On Your Behalf (27 October).  Here is what Eileen said about these flexibilities.

Isn't this amazing.  I so rarely get the chance to bring good news of any kind.  If we go back to last month when I was on the programme, we were talking about Universal Credit and this is the new means tested benefit that will replace things like Working Tax Credit, Child Benefit Tax Credit, Housing Benefit and so on.  And what was concerning was the provisions that had gone through the Westminster Parliament were vary unsatisfactory in various ways.  ... People were very concerned about not importing these provisions into Northern Ireland and this week it was announced in fact that London has agreed that with Northern Ireland we can do things differently.  It will be possible for example for us to have bi-monthly payments, it will be possible to have split payments and issues will be addressed in relation to rents and good news that I noted was that our system will start later than the British one.  In Britain they intend to roll this out from October 2013.  We will start in April 2014, a very important time lag because if this new system, Universal Credit, sort of crashes and burns, so to speak, on take off, at least it won't affect people in Northern Ireland.  So I think that is good news and I should say credit to the Minister for working this out.

As well as welcoming the three flexibilities she also welcomed that important fact that welfare reform will start her later than in Great Britain.  We will not be breaking parity but we will be coming in at the end of the roll out and that too is good news because by that time any problems with the IT system should have been resolved.
This success was the result of hard work over a period of time and I am glad hat we have achieved that success but there is still more to do and one thing is certain.  Welfare reform will remain right at the top of my agenda.
Posted by Nelson McCausland MLA at 03:13