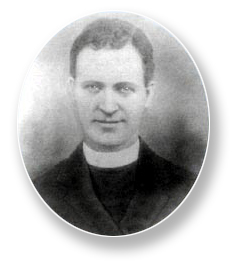 The Irish News (22 November) has a review of a new book about the founder of the Knights of St Columbanus, Canon James Kearney O'Neill.
O'Neill was born at Ballypatrick, near Ballycastle, in 1857.

After studying at St Malachy's Diocesan College in Belfast and Maynooth College he entered the Roman Catholic priesthood and in 1906 he was appointed parish priest of the Sacred Heart parish, Oldpark Road, Belfast.
He established the Knights of St Columbanus in 1915 and as regards this organisation I have taken the following from an excellent booklet, Brotherhoods of Ireland, which was written by Anthony D Buckley and Kenneth Anderson and published by the Ulster Folk and Transport Museum in 1988 to accompany an exhibition.

The Order of the Knights of St Columbanus was formally founded in 1922.  The organisation arose, however, in the period before the Great War, when working people and others were organising themselves as never before into trade unions, friendly societies, temperance societies, Hibernian, Orange, Masonic and other groups based upon the brotherhood ideal.  Father James K O'Neill, a parish priest in Belfast's Oldpark district, who was much concerned with the then recently defined Roman Catholic 'social principles' tried to draw Catholic men into a society 'to cherish fraternal charity and to develop practical Catholicity among its members, to promote and foster the cause of the Catholic faith and Catholic education'.  By early 1916 there were four 'Councils of Knights' in Belfast from which they assembled a Board of Governors.  Soon more Councils of Knights were formed in Armagh, Cork, Derry, Dublin, Lurgan, Newry and Portadown.

That covers the early years of the Knights of St Columbanus but it is only the beginning of the story.  During the years of 'Rome rule' in Eire the Knights of St Columbanus were one of a number of organisations that promoted that agenda.  For example,they were at the heart of the Meath Hospital controversy in Dublin in 1949.
The new biography of Canon O'Neill was written by Frank Rogers, who lives in Ballycastle, and can be obtained directly from him or from Impact Printing in Ballycastle.
Posted by Nelson McCausland MLA at 16:30