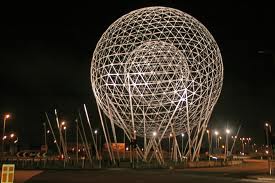 Public art can attract strong and divergent opinions, not all of it positive. Indeed some people regard it all as a waste of money.
That is a view I don't share. There is good public art and there is bad public art but it wrong to write off all public art. Good art can enhance and enrich our physical environment
Therefore it is good to know that two public art pieces in Northern Ireland have been shortlisted for a prestigious United Kingdom public art honour. They are among eight pieces selected by the judges of the Marsh Award for Excellence in Public Sculpture.

Rise was completed in September 2011 and is taller than the Albert Memorial. It has already won several awards and been shortlisted for many more. The sculpture is visible to the thousands of people who use the MI and the Westlink but it is also visible from much further afield. As I come down the Hightown Road into Belfast it stands out very clearly marking the start of the motorway. 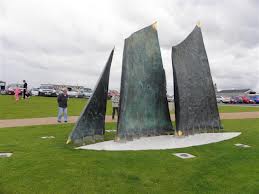 Meanwhile To the People of the Sea is installed on the East Strand at Portrush in February 2011. The bronze and steel sculpture depicts the three sails of a traditional Drontheim boat above the crests of breaking waves and reflects the maritime tradition of the north coast of Ulster.

The Marsh Award has been running for six years and so far it has never been won by a piece of art in Northern Ireland.
Posted by Nelson McCausland MLA at 23:34