NICCY and the Raymond McCreesh Park 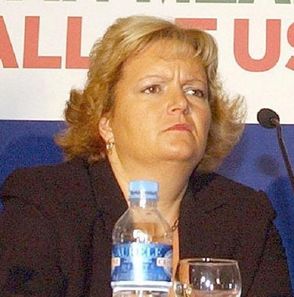 The Northern Ireland Commissioner for Children and Young People, Patricia Lewsley-Mooney, has called for parents to keep their children away from disturbances linked to the ongoing protests about the removal of the Union flag from Belfast City Hall.
Her call came after several children were arrested during violence on Monday evening and she said she was concerned that children were being exposed to serious harm.  She added, 'I call today on every parent and every responsible adult to make sure our children and young people are safe.'
Patricia also spoke about the positive influence that adults can have on children and young people and the need for positive influences.
However, when it comes to the naming of a children's playground in Newry after an IRA gunman, Patricia has been rather less forthright.  Indeed she has been downright evasive.
According to the Irish News (20 December) the children's commissioner said that as she had 'not received a complaint directly from a child or young person or their parent or guardian against Mourne and Newry (sic) Council, I do not have remit to investigate a complaint in relation to this issue.'
I am unaware of her receiving a complaint from a child or a parent in relation to the recent trouble but that did not prevent her commenting on the issue and issuing a call to parents.  There is absolutely no reason why she cannot comment on the naming of the playground after an Irish republican terrorist!  She has simply chosen to remain silent.
She then attempted to justify her silence by saying, 'I note that the Equality Commission is investigating this matter and I await the outcome of this before considering any further action.  My powers allow me to take forward investigations or complaints.  However I am not able to do so while another body is investigating the matter.'
That excuse does not stand up to scrutiny.  There is no need for an investigation or a complaint and no need for any delay.  All that is required is that Patricia Lewsley-Mooney state that to name a children's playground after an IRA terorist is to provide a 'negative influence' and a bad example for children.  She has spoken about 'positive influences' and the value of these.  On the other hand there are 'negative influences' that are detrimental to children and surely an IRA terrorist is a 'negative influence'.
I knew Patricia Lewsley-Mooney well when she was an SDLP councillor in Belfast and she was never backward in speaking her mind.  Her silence on a matter which clearly relates to the welfare and wellbeing of children is therefore especially disappointing and damages the credibility of her office.
Posted by Nelson McCausland MLA at 12:22