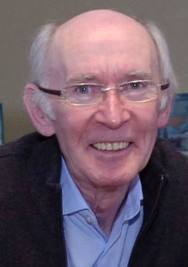 Jude Collins is a retired educationalist and a part-time journalist and commentator.  He is also one of the most sectarian journalists I have ever come across and that's saying something.  But in his latest post on his own blog he has really excelled himself.
Collins has posted about Sean Kelly, the man known as 'the Shankill bomber' and a man who was convicted of the murder of nine innocent Protestants.  Here is what Jude Collins said:

I have a question: why is Sean Kelly hated so much by unionists? “He murdered nine innocent people,you idiot!” might seem a reasonable reply. Except that my dictionary describes murder as “the unlawful premeditated murder of one person by another”. What Kelly did was unlawful - he helped carry a bomb into a crowded area of people - but the premeditated bit is slightly less clear. He was bent on killing people, but the people he killed weren’t those he had premeditated on killing. The reason behind the bomb was that it would catch a UDA meeting that was said to be happening above the fish shop in the Shankill. Those were the people that Kelly and his companion Thomas Begley were intent on killing, not the people in the fish shop. Then the bomb went off prematurely. The evidence for this is that they very nearly were both killed themselves in the blast. If that is the case - and it seems to me impossible to construct it any other way - then Kelly was not guilty of the premeditated killing of the ten people - including his companion - who died. He was guilty of the premeditated intention to kill the UDA people but failed. Only if you ignore that fact does the unique hatred he generates make sense.

By reason of some rather twisted and tortuous reasoning, Jude Collins argues that Sean Kelly was not in fact a murderer!  So what were the facts?

On 23 October 1993 two IRA terrorists from Ardoyne entered a fish shop on the Shankill Road.  They were Thomas Begley and Sean Kelly and they were planting a bomb.  It was a Saturday afternoon, the road was crowded with shoppers and families who were out for the afternoon, and the fish shop was packed with staff and customers.
Forensic evidence showed that Thomas Begley was holding the bomb at the counter of the shop when it exploded prematurely, killing Begley and nine innocent victims.  They included the owner of the shop Desmond Frizzell, his daughter Sharon McBride, George Williamson, Gillian Williamson, Leanne Murray, Wilma McKee and a family of three, Michael Morrison, his partner Evelyn Baird and her seven-year-old daughter Michelle Baird.  Meanwhile fifty-seven innocent people were injured, some of them seriously.  Begley's accomplice, Sean Kelly, was also injured.
The impact of the atrocity was profound and it caused a very deep hurt within the unionist community, a hurt that was exacerbated when Gerry Adams carried the coffin of Thomas Begley.
The only one of the victims I knew personally was Desmond Frizzell himself. He was a fine Christian and a gospel singer and he sang on several occasions in the church I attended.  However, although almost twenty years has passed since the atrocity, I can still remember that awful day and the days that followed.

Afterwards the Provisional IRA claimed that their intended target was some members of the UDA who had on occasions used a flat above the shop, as if that in some way minimised the gravity of their crime or explained it away.  However the plain truth is that the bomb was being placed downstairs, in a shop which was packed with customers.  Moreover even if the IRA bomb had killed members of the UDA, it would still have been murder.  No one has the right to take life and certainly not members of the Provisional IRA.

The IRA also claimed that there was an 11 second fuse on the bomb and that if it had not exploded prematurely those 11 seconds would have given the staff and customers time to get out of the shop.  However 11 seconds would almost certainly not have given the people in the shop time to get away.  I can well imagine the chaos and confusion as customers came to terms with what was happening around them and then tried to make their way out into the street.  No, that excuse doesn't hold.  Those more senior IRA men who planned the terrorist attack and those IRA volunteers who planted the bomb had no regard for human life.
In spite of all the twisted and tortuous reasoning of Jude Collins, this was murder, cold, callous murder.
At the trial of Sean Kelly, Lord Justice MacDermott said, 'This wanton slaughter of so many innocent people must rank as one of the most outrageous atrocities endured by the people of this province in the last quarter of a century.'  Lord MacDermott was certainly in no doubt as to what happened that day on the Shankill Road - this was one of the most outrageous atrocities of the Troubles.  That was why Kelly was convicted of murder, nine counts of murder, and why he was given nine life sentences.

Sean Kelly served seven years of his life sentence and was then released in July 2000 under the terms of the Belfast Agreement.  However he was returned to prison on 18 June 2005 by Peter Hain, the Northern Ireland Secretary, who said that he had directed the return to prison because of 'security information'.  He also said he was satisfied that Sean Kelly 'had become re-involved in terrorism'.  He was then re-released on 28 July, just six weeks after his arrest and the day before the IRA Army Council announced the end of its terrorist campaign.
Jude Collins' article is nasty and squalid and of course his article says much about its author.  Why on earth would anyone want to write an article arguing that the Shankill bombing was not murder?
For many years Jude Collins was a lecturer in education at the University of Ulster.  It is sad to think that for so many years the minds of young trainee teachers were exposed to the views of such a warped individual.  Fortunately he is no longer a university lecturer.

However from time to time he is invited on to BBC radio and television programmes as a contributor or commentator.  I sincerely hope, in the light of this appalling article, that such invitations will now come to an end and I for one will be writing to the Northern Ireland controller to draw Jude Collins' views to his attention.
Posted by Nelson McCausland MLA at 15:59