The Workers' Party and the Sunday World 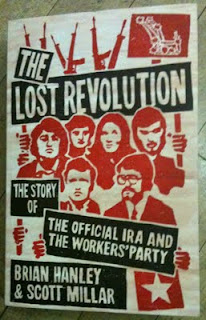 On Saturday 26 January I posted on this blog about the Workers' Party and the Official IRA and in the course of the post I quoted from the standard history of the Workers' Party, The Lost Revolution: The Story of the Official IRA and the Workers' Party.
This seems to have upset Richard Sullivan, a journalist with the Sunday World, who managed to devote an entire page in his newspaper yesterday (3 February) to attacking both me and the post.
The authors of the book from which I quoted are Dr Brian Hanley and Scott Millar.  Brian Hanley lectures in history in the Institute of Irish Studies at the University of Liverpool and Scott Millar is a journalist.  The book itself is highly regarded and in 2010 the Political Studies Association of Ireland honoured the authors by awarding them the prestigious Brian Farrell prize for the best political science book published in 2009.
This is the book from which I quoted a short extract and it is this extract which has annoyed Richard Sullivan!  So what was the extract?  According to Hanley and Millar:

The Sunday World remained an outlet for WP publicity and its populist analysis of the political situation was often in line with the party's positions. The paper steered clear of any reference to the actvities of Group B [Official IRA], but its exposes of criminal activity by other loyalist and republican paramilitaries was not without its costs: its Northern editor, Jim Campbell, was badly wounded in a UVF shooting in May 1984.

Based on that short extract I commented:

The silence of the Sunday World about the criminality of the Official IRA contrasted sharply with its focus on the criminality of other paramilitary organisations and is therefore all the more remarkable. Moreover this was no accident. There were people on the staff of the Sunday World who were or had been members of the Workers' Party or the Official IRA. Are we to believe that they had sources of information about every other paramilitary organisation but no sources of information about the Official IRA? I think most people will find that rather hard to accept!

The question becomes all the more interesting in view of a document written in 1989 by Sean Garland to the Communist Party in East Berlin, admitting that the Officials were engaged in criminality to raise money for the party. The recent discovery of this document by the Irish Times sheds a new light on that era of the Officials and the journalists and others who were at various times associated with the Official republican movement.

Richard Sullivan had a whole page at his disposal, so did he mention Hanley and Millar or challenge their book?  No he never mentioned them at all and he did not respond to what they had written.  Here is what Richard Sullivan said in response to my post:

The Minister goes on to allege the Sunday World was a mouthpiece for the Workers Party and even suggests we covered up the activities of the Official IRA.  Both ludicrous statements, as the record of this paper will show.

In fact I merely quoted from a book which was written by two respected authors and which has been in print since 2009.  Whatever Richard Sullivan might think about the 'record' of the Sunday World, it certainly didn't convince the authors of The Lost Revolution.  Furthermore, if Richard Sullivan is so upset by what this book states, why has it taken him so long to deny something that appeared in print three years ago?

That is really the core of his article but in true Sunday tabloid fashion Sullivan manages to fill out an entire page with a lot of irrelevancies, a lot of distractions and a blatant untruth.  The irrelevancies I will dismiss as unworthy of comment but there is one particularly vile untruth.  According to Richard Sullivan: 'Nelson fails to condemn the killing.'
No, Richard, certainly not.  Here is what I said about the murder of Martin O'Hagan and it couldn't be clearer:

Before turning to the subject of this post let me be absolutely clear - human life is given by God and murder is a sin - it is always wrong and those who are guilty of murder should be punished.

So once again Richard Sullivan gets his facts wrong!  It is not the first time I have had to correct him and it probably won't be the last.
Posted by Nelson McCausland MLA at 02:02