This morning the Irish News reported a campaign to retain a small rural primary school in county Armagh.  St Michael's Primary School is at Clady and is a Roman Catholic maintained school.  It has just 44 pupils and falls well below the figure of 105 pupils for rural schools, as set by the Department of Education. 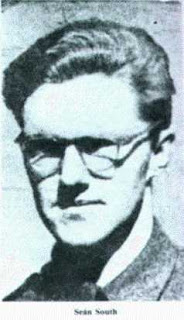 One of those supporting the school was Karen Savage, secretary of the Sean South GAA Club.  She said, 'Our community is stunned at this news.  We live in a very rural farming area.  Our football club is part of that community as is the school.  The two go together.  If one isn't there the other will disintegrate and disappear.  We need both these links to keep our community alive.'

The name of the GAA club took my attention because Sean South was a famous and indeed infamous member of the IRA during the Border campaign that started in 1956.  He is eulogised in the Irish republican song Sean South of Garryowen.  I checked out the website of the GAA club and this gives the name as Clady GFC Sheain Sabhat.  The club uses the Irish Gaelic form of Sean South.  There was a GAA club in the area back in 1888 but clubs seem to have come and gone and Sean South GFC was formed in 1957.

Sean South was born in Limerick in 1928 and was educated in a school run by the Christian Brothers.  He was a member of the Gaelic League and Sinn Fein and according to his biographer Mainchin Seoighe he was also a member of the Fascist party Ailtiri na hAiseirighe.  This is sometimes disputed but he was certainly familiar with their publications and their views.

On 1 January 1957 fourteen IRA men mounted an attack on Brookeborough police station in county Fermanagh.  They were well armed but the attack failed and two of the IRA men were killed, Sean south and Fergal O'Hanlon.  Their bodies were taken across the border into the Irish Republic and there followed what J Bowyer Bell described as 'a week of all but national mourning'.

Vast crowds lined the route of Sean South's funeral cortege to Dublin and many local authorities passed resolutions of sympathy with the families of the two dead IRA terrorists.  At midnight on 4 January twenty thousand people, including the mayor, waited in Limerick for the hearse and the next day fifty thousand people attended the funeral.  Within a week of his death the song Sean South, which is a eulogy to the IRA gunman, appeared in the Irish Catholic, a weekly Roman Catholic paper 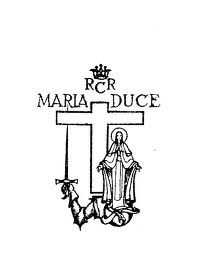 As well as being a militant republican, Sean South was a staunch Roman Catholic and he was at oneRosc.
time a member of the Legion of Mary and the Knights of Columbanus.  He was also a member of Maria Duce (Mary our Leader), an ultra-right wing Roman Catholic organisation led by Fr Denis Fahey of the Holy Ghost Order in Dublin.  South established the Limerick branch of Maria Duce and between August 1954 and January 1956 he published a whole series of articles promoting Maria Duce teaching in the Gaelic League monthly newspaper

Fr Denis Fahey was closely involved with Fr Edward Cahill's An Rioghacht study group and wrote a number of books including The Rulers of Russia (1938), in which he argued that Communism was a conspiracy organised by Jews and Freemasons.  This was a view they shared with Hitler and the Nazis.  Following the death of Cahill in 1941 An Rioghacht became more moderate and so in 1945 Fahey founded Maria Duce, which was stridently anti-Protestant and anti-Semitic.  This was the organisation of which Sean South was an enthusiastic member.

Sean South was an IRA terrorist and a member of a Roman Catholic society that was anti-Protestant and anti-Semitic and which believed that Roman Catholic governments should suppress Protestants.  That is the truth about Sean South but you won't find it on the GAA club website.

The Clady GAA club was formed in the year that Sean South died and was named in honour of a man who was an IRA terrorist, a religious bigot and an anti-Semite.  We have seen some changes in the GAA and those changes are welcome but there is still some way to go, especially at a local level where there are clubs and competitions named after IRA terrorists.
Posted by Nelson McCausland MLA at 13:19