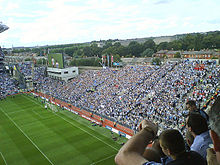 On 23 September 2012 TG4 broadcast a history of Hill 16 at Croke Park, the home of the GAA, in Dublin and it set right one of the myths about Croke Park.
There is a patriotic tradition that Hill 16 was built from the rubble left behind after the British Army shelled Dublin during the 1916 Easter Rising.
However this story is a complete fabrication as Hill 16 was built a year before the 1916 Rising as an embankment for spectators and was originally called Hill 60.  Moreover that original name came from a hill in Gallipoli on which members of the Royal Dublin Fusiliers suffered heavy casualties in 1915.
That original name stuck throughout the 1920s and 1930s until senior figures in the GAA decided that it was inappropriate to have a section of Croke Park named after a battle involving the British Army.  So Hill 60 became Hill 16, a name that would link it to 1916, and the story began to circulate that it had been built from the ruins of O'Connell Street.
This story gained widespread acceptance and when the ground was redeveloped archaeologists were on hand to sift through the rubble, presumably in the hope that they might find some relic of 1916, perhaps a bullet or a fragment of the GPO.

The truth however is that the for several decades the hill bore the name of a place associated with the Royal Dublin Fusiliers and commemorated their service in the First World War!

Posted by Nelson McCausland MLA at 15:59