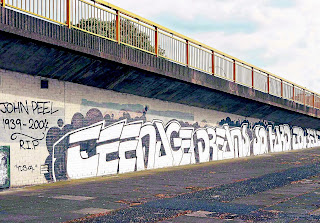 Earlier this year there was some controversy, largely driven by elements in the media, about the removal of  some graffiti from the Bridge End flyover in East Belfast.  The graffiti included the words 'Teenage dreams, so hard to beat', from the Undertones' debut single Teenage Kicks.

According to media reports the graffiti appeared on the day after the death of BBC Radio 1 DJ John Peel and there was a specific reference to him with the words 'John Peel 1939-2004 RIP'.
Now a new mural is to be installed, designed by young people from East Belfast, and I understand that it is based on the Teenage Kicks song.
The original work was put up as a tribute to John Peel, not as a tribute to the Undertones.  This time however there will be no mention of John Peel, who died in 2004, almost ten years ago, and the new mural will be all the better for that.
On this, as on many other subjects, one of the best commentaries on the previous controversy came from Belfast Telegraph feature writer Gail Walker.  In the Belfast Telegraph (25 June 2013) she wrote about what she described as 'the furore among the chattering classes' and then cut to the heart of the matter in relation to John Peel.

It would have been useful if at least one male person were to acknowledge  that the late Mr Peel's reputation is embroiled in the murky tales and allegations  which have emerged from the BBC since the death of Jimmy Savile.  Indeed Peel's track record of indulging in underage sexual activity on both sides of the Atlantic is well documented, and was well known for many years, largely from his own bragging testimony, but not completely from that source.  There were revelations exposed prior to his death which, we see now, followed exactly the patterns of prolific seduction and abuse so graphically documented in Savilegate, Hallgate and so many other cases.

Gail Walker referred to 'our most sophisticated scions of art and culture' who wanted the mural restored as it was, a tribute to John Peel, and noted that there was 'a dribbling, misguided, incontinent reverence for the greasy abuser Peel'.
John Peel was unashamed about his prolific sexual activity with underage girls and today, with a greater awareness of 'celebrities' who engaged in such behaviour, it would be unthinkable to have a mural as a tribute to the now deceased Radio 1 DJ.
Posted by Nelson McCausland MLA at 15:24