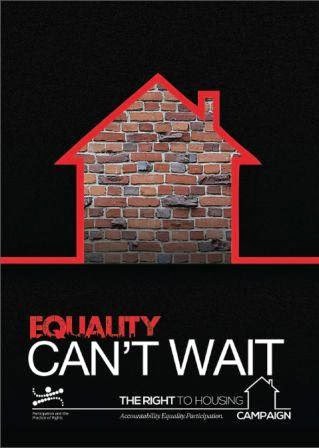 For some years the Participation and the Practice of Rights (PPR) project has been very active in relation to housing need in North Belfast.  Their figures have ben used by nationalist and republican propagandists to support their claim that there is discrimination against Roman Catholics in relation to housing.  Their figures and their claims have also been accepted by others such as the UN Special Rapporteur Ms Raquel Rolnik.
I have already pointed out that they have distorted the housing situation by considering only part of the North Belfast constituency.  The constituency covers all or part of four Housing Executive districts, Shankill, North Belfast, Newtownabbey 1 and Newtownabbey 2 but PPR focus on the office which has a Roman Catholic majority and ignore the three offices which have a Protestant majority.
Such a discriminatory approach was repeated when Ms Rolnik came to Belfast and PPR took her to visit only Roman Catholic communities in North Belfast.  Once again the Protestant communities were ignored.
But now the fraudulent nature of PPR propaganda has been exposed in an even more alarming way.
For many years applicants to the Northern Ireland Housing Executive were designated as Protestant or Catholic but in 2009 the NIHE changed its practice and afforded applicants the opportunity to register themselves as Protestant, Catholic or other.
In their recent document Equality Can't Wait, PPR claim that this change has produced 'an 11% drop in Catholic representation and 7% drop for Protestants' (page 19), a greater drop for Roman Catholics.  In fact they have got their figures wrong and it should read '13.6% drop in Catholic representation and 14.3% drop for Protestants'.  This correction effectively reverses PPR's argument in the following pages of the report and means that a slightly higher percentage of 'perceived Protestants' than 'perceived Catholics' chose not to self-report a religion to the NIHE.
This is just one example of the fundamental flaws in the PPR report but it shows how unreliable PPR propaganda really is.  They have made much of the 2009 change and have claimed that it has resulted in a greater impact on the figures for Roman Catholics, whereas, if anything, it has had a greater impact on the figures for Protestants.

This is the fourth post in this series and there are more to come.  The truth is emerging and the myths that are peddled by republican propagandists are being exposed,   Unfortunately the propagandists prefer to wallow in their imagined discrimination.  Their narrative has become so embedded in the nationalist and republican psyche that they find it almost impossible to acknowledge the truth that the housing waiting list for Protestants in North Belfast is roughly the same as the waiting list for Roman Catholics.

Posted by Nelson McCausland MLA at 17:02