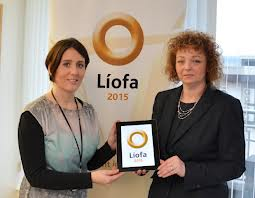 Sinn Fein DCAL minister Caral Ni Chuilin has been promoting an Irish language campaign known as Liofa.  One aspect of this has been a series of advertisements on radio and television and also in newspapers and in billboards.  It is the content of these advertisements that causes me concern.

The newspaper advertisement is headed 'EVERYBODY SPEAKS IRISH EVERYDAY'.

I used to live in a cul-de-sac but that doesn't mean I speak French.

Many people live in a bungalow but that doesn't mean they speak Urdu.

I often enjoy eating a banana but that doesn't mean I speak Portuguese.

The core claim made in the Liofa advertisement is spurious and is simply nonsense.

Advertising should be legal, decent and honest.  I would suggest that the Liofa advertisements are in fact disingenuous and misleading and therefore breach the requirement for honesty.

If we were to follow the logic of Liofa we would have to say ,'EVERYBODY SPEAKS LATIN, ULSTER-SCOTS, FRENCH, SPANISH, PORTUGUESE, URDU and ........ EVERYDAY' but then that wouldn't suit the Sinn Fein cultural agenda.

Finally, if the advertisements are intended to encourage a greater acceptance of the Irish language, they are certainly failing.  I think they are actually many antagonising people who find it intrusive to have Irish language propaganda broadcast into their homes.
Posted by Nelson McCausland MLA at 00:24