The following paragraph is taken from Newton Emerson's column in the Irish News today (12 April): 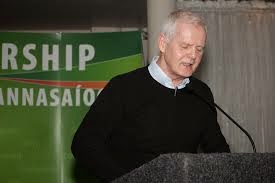 Sinn Fein's former Stormont political director Leo Green, who suddenly left his post before February's ard fheis, has confirmed rumours of a fall-out by bringing an unfair dismissal case.  One of his complaints is discrimination on the grounds of political opinion, which would be unacceptable in most jobs but is clearly problematic when  employed at this level of politics.  DUP minister Nelson McCausland said back in February that Green had left due to major differences within Sinn Fein over welfare reform and events are increasingly bearing this out.  The issue is certainly profound, affecting not only benefit claimants, public sector workers and public service users but also raising the questions of whether Sinn Fein is an aspirational or eternal protest party and whether it wants Northern Ireland to succeed or fail on the road to a united Ireland.
Newton Emerson makes some important points and it will be interesting to see how Sinn Fein faces up to the challenge of welfare reform.  The signs so far are certainly not encouraging.
However a failure to move forward with a Northern Ireland version of welfare reform would have serious implications for departmental budgets, especially health and education, and for those workers in Northern Ireland who are employed by the Social Security Agency to deliver welfare to a number of regions in England.  Sinn Fein will get no thanks from those local workers who are likely to lose their jobs.
Finally, as regards what I said back on 8 February, I merely noted that Ken Reid had reported the absence of Leo Green from the Sinn Fein ard fheis and said that I had not seen him in the corridors at Stormont for several weeks.  I also noted that he was not the only Sinn Fein advisor who had been 'noticeable by his absence'.  Since then at least one newspaper has mentioned the name of Jackie McMullan.

It is clear that there are divisions within the party, as noted by Newton Emerson, and all is not well in the world of Sinn Fein.

Posted by Nelson McCausland MLA at 13:40