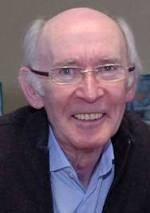 That nasty little man Jude Collins has taken up his poisonous pen again this week to write his column in the North Belfast News (17 May).
The column is based on a recent meeting between members of the DUP and David Cameron.  Cameron invited the party leader and the MPs to meet him in Downing Street and it was an invitation they accepted.
The invitation and the acceptance should not surprise anyone.  David Cameron is the prime minister of the United Kingdom and since the DUP is the fourth largest party at Westminster it is both right and natural that there should be meetings such as this.
Of course this was enough to excite the fevered mind of Jude Collins and he went on to speculate about the content of the conversation.  We do know that Libyan compensation for the victims of IRA terrorism was on the agenda.  Libya was a major source of weapons and explosives for the Provisional IRA during their terror campaign.
However Collins made no mention of that and his great concern was that 'marches' might have been on the agenda.  Here is how he described the Loyal Orders:

a group of men who, in the name of culture, get together annually with other men and dress up before emerging to disrupt life for everyone else.

a group of people whose motto is 'Not an inch' and whose cultural expression includes urinating outside Catholic churches.

This is I assume a reference to an incident that took place in September 2012 when a bandsman urinated in the street outside St Matthew's in East Belfast.  Subsequently the Orange Order described the incident as 'outrageous and unacceptable' and sent a representative to apologise for the behaviour of the bandsman.  The chairperson of the Confederation of Ulster Bands also apologised for the incident.  Surely that should have been an end of the matter but no, not in the fetid mind of Jude Collins.
Last weekend in Newry several men removed wreaths from the war memorial and threw them into the Clanrye River.  At least one of the men also urinated over the war memorial.  Subsequently two men were arrested and will appear in court.  Of course it is not the first time that such a thing has happened.  Earlier this year a man named Patrick Peter McIlroy, of Cromwell Street, Belfast, was convicted of urinating on a wreath at the war memorial in Lurgan.
Since Jude Collins believes that Orange 'cultural expression includes urinating outside Catholic churches' does he also believe that Irish cultural expression includes urinating on war memorials?  I await with interest his column on the incident in Newry.
Of course, at the end of a week in which republican slogans were painted on an Orange hall, does Collins also believe that Irish nationalist cultural expression includes defacing Orange halls?
With the North Belfast News providing its readers with a weekly diet of Jude Collins is it any wonder that we have such a long way to go to build better community relations in the north of the city?
Posted by Nelson McCausland MLA at 06:30