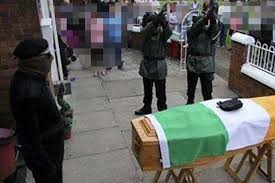 Yesterday several reports named Oglaigh na hEireann as the terrorist organisation responsible for staging the paramilitary display at the wake of Seamus McLaughlin in Ardoyne.  The incident involved two masked and uniformed gunmen firing shots over the coffin in the front garden of a house in Butler Place.
Today the Irish News (14 June), which gives the surname as McLaughlin, carries an update on the story and provides some background on the organisation involved:

The paramilitary group calling itself the 'IRA' has said it fired shots over the coffin of a veteran republican in north Belfast this week.  The 'IRA' claimed the 76-year-old was a member of the organisation and had given 'full approval' for the paramilitary display.

The organisation announced its formation in 2012 after a merger between the  Real IRA, Direct Action Against Drugs and independent republicans in mid Ulster.

It is understood a volley of shots was also fired in his memory in Dublin.

Mr McLaughlin died in Dublin on Sunday and his remains were returned to north Belfast earlier this week.  He was buried on Thursday after Requiem Mass at Holy Cross church in Ardoyne.

It is believed the veteran republican had been living in the Republic where he had been on the run for four decades.  He had previously been linked to the 1974 Birmingham pub bombings which killed 21 people.

A spokeswoman for the PSNI said they were investigating the shots.  Earlier reports had claimed they were fired by Oglaigh na hEireann.

I may be wrong and if so I am happy to be corrected but so far there has been no condemnation of the paramilitary display from Sinn Fein or from any of the dissident republican spokesmen, including those linked to GARC and those who stood in the recent council elections, Dee Fennell and Sammy Cusick.  Their silence has been deafening.
Belfast's new lord mayor Nichola Mallon represents the area, as does Alban Maginness MLA, but there is no statement of condemnation on the SDLP website.
The funeral mass for Seamus McLoughlin was conducted in Holy Cross church but there has also been silence from the local parish priest, even though the incident took place a short distance from Holy Cross.
Why have the media not demanded responses from republican politicians and spokesmen, both mainstream and dissident, and indeed from the broader nationalist community?  The failure of the media to do so says a lot about the media.  Oh well, perhaps we'll get a full hour on the Nolan Show on Monday ... or perhaps not.
Posted by Nelson McCausland MLA at 08:53