The Irish language, Sinn Fein and the IRA

Some rather naïve people try to promote the Irish language within the unionist community in Northern Ireland and present it as part of a 'shared heritage'.  We should embrace our 'Gaelic heritage' they tell us.
Now much of their propaganda is deeply flawed, a point that I have made on many occasions.  Most recently I highlighted the ridiculous attempt by a contributor to Wikipedia to tell us that the village of Mossley in Newtownabbey was named from some obscure Irish word.  It was in fact named after the town of Mossley in England.  Other examples of such spurious nonsense appear on a regular basis and I will give another example in a forthcoming post.
However the reality of the Irish language movement in Northern Ireland is well illustrated recently when St Colm's High School in Twinbrook was the scene for the launch of new Gaeltacht bursaries provided by Sinn Fein and the Bobby Sands Gaeltacht Scholarship to two children.
The Gaeltacht bursaries are named after an IRA terrorist and hunger-striker and the report in An Phoblacht (2 July) was entitled Bobby Sands Gaeltacht Scholarships awarded.
﻿Two children received bursaries and other children received certificates for their progress in Irish.  Indeed the report included a photograph of Martin McGuinness signing a Bobby Sands Scholarship certificate, which has a photograph of the IRA terrorist in the top left corner.  This is what was presented to the children and it was an endorsement of IRA commander Bobby Sands. 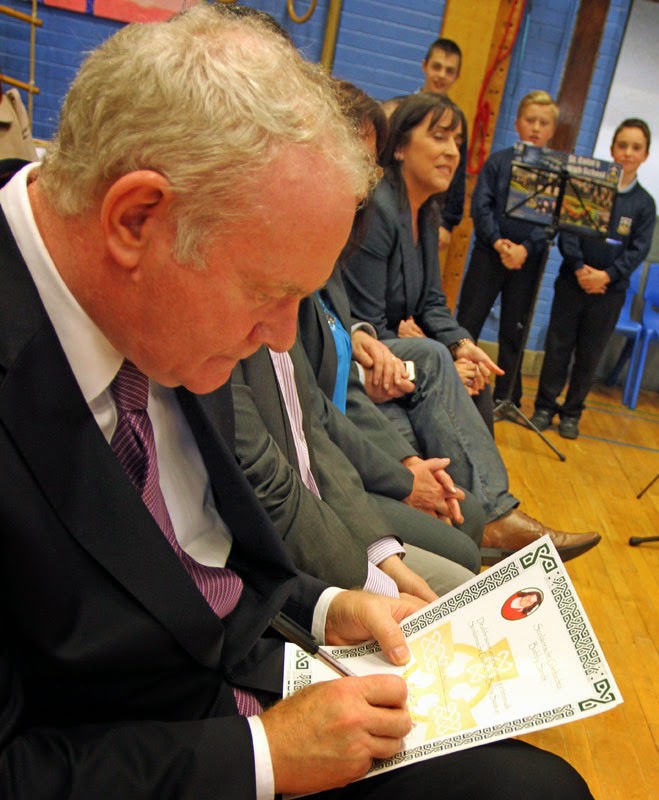 Of course all of this happened in the presence of and with the approval and participation of the St Colm's High School principal Cathy McMurray, who said that Irish culture was a central and important part of the school's curriculum.  I wonder if Bobby Sands is a part of that culture.
So far neither the school, the Roman Catholic bishop nor the Council for Catholic Maintained Schools have commented on the event and it hasn't reached the BBC or UTV.  But maybe some journalist will start asking questions and keep on asking them until he or she gets an answer.

St Colm's High School is a co-educational school that serves the parishes of St Luke's, The Nativity, Christ the Redeemer, St Anne's, Our Lady Queen of Peace Kilwee and Derriaghy
Posted by Nelson McCausland MLA at 08:17