Fra Hughes and the INLA funeral 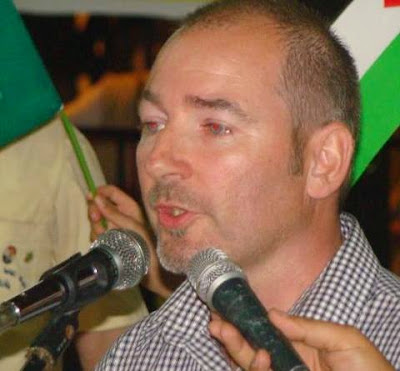 Back in 2012 and 2013 I published some posts about Northern Belfast political activist Fra Hughes.  He wasn't entirely happy about this and made a number of complaints about the fact that I had highlighted his political views as well as his role as an 'independent parades observer' at parades by the Orange Order on the Crumlin Road.
However since then Hughes has been very much to the fore in proclaiming his politics.

In May 2014 he stood as an Independent candidate in the Castle electoral area in the election for Belfast City Council and then in May 2015 he stood as an Independent for the North Belfast seat at Westminster.
His Westminster platform was one of 'anti-cuts' and 'anti-austerity' but he trailed in last with just 529 votes, which was 1.3% of the votes cast.  Nigel Dodds was elected with 19,096 votes.  This was down on Fra Hughes's result in the 2014 council election where his 218 votes represented 2.1% of the votes cast.
Nevertheless Hughes remains a very busy man and last Saturday he was up in Londonderry for the funeral of Peggy O'Hara.


Here is what Hughes said on his Facebook Page and in it he makes his views on Northern Ireland fairly clear.

I attended the funeral today of Peggy O'Hara at the Long Tower Chapel in Doire in the company of about 1000 mourners.  With an honour guard of several hundred led by a lone piper with beautiful singing in the church and pitch perfect piping laments by Pol MacAdaim it was a fitting tribute to a woman, a legacy and a family who gave so much in the struggle for Irish National Liberation.  An inspiring grave side oration left all those in attendance in no doubt of Peggy O Hara's commitment steadfastness and principle as a mother, an activist, as a revolutionary leader.  There are not many funerals like Peggy's because there are not many people like Peggy, a woman I never met but whose revolutionary zeal will infuse generations to come.

Rest in Peace Mrs O'Hara, a huge loss to her community and the national struggle, a woman possessed of an irrepressible spirit.  My condolences, thoughts and prayers are with her family, comrades and friends, who will miss her most.  A friend commented that Thatcher wasn't the real Iron Lady, it was the mothers of the hunger strikers.  Tommy you are 100% correct.  Peggy, mother of INLA hunger striker Patsy O'Hara has been reunited with her gallant son whom she lost in 1981 in the H Blocks of Long Kesh.  Mother and son, two rebels united in struggle now reunited in death.  ~And you dare call me a terrorist while you look down your guns, when I think of all the deeds that you have done.  You have plundered many nations, divided many lands, you have terrorised their people, you've ruled with an iron hand, And you brought this (800 year) reign of terror to my land!  The O'Haras fought against injustice, oppression and occupation.  Courage has many names but today I remember two most of all, Patsy and Peggy O'Hara.  At peace at last.

Fra Hughes eulogised the 'struggle for Irish National Liberation, praised the gallantry of an INLA terrorist who was fighting against 'injustice, oppression and occupation'  and condemned '800 years of terror', obviously referring back to arrival of the Anglo-Normans.
That wasn't the sort of language he used in his Westminster election literature but here Fra Hughes is clearly speaking from the heart.
Posted by Nelson McCausland MLA at 14:04