Culture in the classroom, including Orange culture 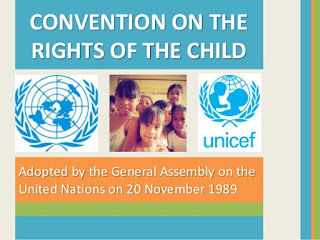 Tonight there has been some comment on Facebook about a situation that arose earlier today in a primary school in North Belfast.
The issue of culture, including Orange culture, in the classroom is an important one.
Bringing the culture of the child and the child's home and family into the school is (1) right for the child - it leads to a better educational outcome and (2) the right of the child.
In this post I simply want to quote one sentence from the United Nations Convention on the Rights of the Child (UNCRC).  There are other relevant paragraphs in the UNCRC but paragraph 29c is the most relevant and specific.

States Parties agree that the education of the child shall be directed to the development of respect for the child's parents, his or her own cultural identity, language and values, for the national values of the country in which the child is living ...

In this case the 'state party' is the United Kingdom government which has signed the UNCRC and therefore in any part of the United Kingdom the education of a child should be such as implements this principle.
If a child comes from an Orange family, in which there is an affection for and affinity with the Orange Order and Orange culture, then there should be respect for the Orange Order and Orange culture in the classroom.  It should not be denigrated in any way and that includes denigration by the wilful exclusion of Orange culture.
To suggest to a child that Orangeism is something negative or divisive would undermine the child's respect for his parents and his family.  Moreover the exclusion of Orange culture from the classroom and curriculum would contravene Article 29c.
That culture must be included, not excluded, and should be included in a way that is positive and welcoming.
Any parent who is faced with this situation should refer to Article 29c of the UNCRC.  Then if the school ignores it and the outcome is unsatisfactory both child and parent can take the matter up with the Northern Ireland Commissioner for Children and Young People.
We hear a lot today about 'rights' and children from Orange families or an Orange community have rights too!
Posted by Nelson McCausland MLA at 15:47