Will UNITE's Newry branch be in Dublin republican parade? 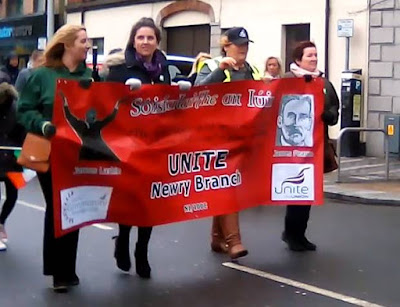 On Easter Saturday some members of the UNITE trade union in Newry took part in a republican Easter rebellion parade from the notoriously-named Raymond McCreesh Park to the republican plot in St Mary's cemetery.

I highlighted this issue in in my Belfast Telegraph column and on Facebook and I know that many union member's were alarmed by what had happened.

Subsequently the union's Northern Ireland regional secretary Jimmy Kelly said that there would be an 'internal review' of what had happened.

As well as deciding to carry a UNITE banner in the republican parade on Easter Saturday, the UNITE Community branch in Newry also decided to take part in a commemoration in Dublin this Sunday.


Our invite was considered within our branch and it was unanimously agreed that we would attend the ANAM 16 commemoration [in Newry]; and two further commemorations that are to be held in Dublin and Belfast on the 24tth/25th of April.  The latter of these has been organised by Unite, which will commemorate both The Somme and 1916 Rising in a play.  All three of these commeorations are non-political.

This Sunday there will be a major event in Dublin, organised by the republican National Graves Association.

So there are several questions that need to be asked:

The senior officials in Northern Ireland probably knew nothing about what happened in Newry until it was highlighted but this time they know in advance about what is proposed for this coming Sunday.

Posted by Nelson McCausland MLA at 00:33