The Scotch-Irish origins of the US Railway Mail Service 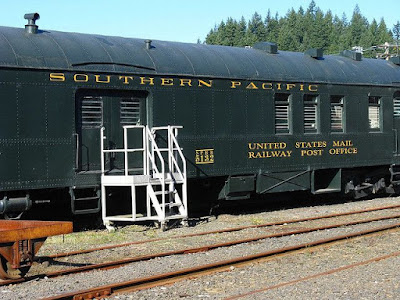 Last year a book was published with the title How the Post Office Created America.  The author was Winifred Gallagher and the following extract (p 160) records the creation of the United States Railway Mail Service.

Two years later, a crisis brought on by the exigencies of war finally pushed the post to inaugurate the official Railway Mail Service (RMS).  General Ulysses Simpson Grant had made Cairo, Illinois, the headquarters for his western campaign because of its proximity to the railroad and the Mississippi and Ohio rivers.  The backlog of mail to and from the huge Union force stationed there forced Congress to allow the post to try something new.  Always quick to seize an opportunity, Postmaster General Montgomery Blair authorised George Armstrong, an inventive assistant postmaster at Chicago's huge distributing post office, to run America's first official railway postal route, which operated on the Chicago & North Western line.  The experiment was such a success that customised RPO cars were deployed on many routes between big cities.  The service was well established nationwide by the 1880s, and sending a letter from New York City to Raleigh, South Carolina, which had taken ninety-four hours in 1835, took just nineteen hours in 1885.  By 1910 the RMS would handle an astonishing 98 percent of America's intercity mail.

Such was the success of the Railway Mail Service that well into the 20th century most of America's intercity mail was efficiently sorted as well as transported aboard rapidly moving trains.

It is noteworthy that the three names mentioned in the account, General Ulysses Simpson Grant, General Montgomery Blair and George Armstrong, were all Scotch-Irish Americans of Ulster-Scots descent. 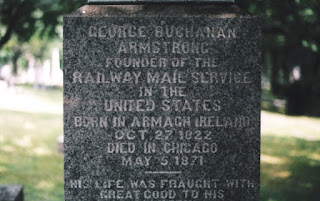 Colonel George Buchanan Armstrong (1822-1871) was born in county Armagh and emigrated from Ulster to America with his parents in 1830.  His mother was a Buchanan and so he had Ulster-Scots ancestry on both sides of his family.

Winifred Gallagher has explained the importance of the Railway Mail Service and it was a thoroughly Scotch-Irish enterprise with a principal founder who was 'born in Armagh'.

Posted by Nelson McCausland MLA at 11:16