A look at the Gaelic Language Act in Scotland

The demand for a 'muscular' standalone Irish Language Act continues to be made and so it is interesting to look across to Scotland to see the outworking of the Gaelic Language (Scotland) Act 2005.  The Act was passed more than a decade ago so we can look back over that decade to see something of that outworking.

One of the more recent examples is the five year Gaelic Language Plan for Police Scotland, which was published on 29 December 2016 and runs to 50 pages.  Here are just a few commitments from the 50-page document:

As regards the cost it is rather evasive: 'No new budget allocations are presumed to deliver the elements of this partnership activity and the use of staff time. Police Scotland have accessed external funding and will continue to explore opportunities to add value to the delivery of this plan.'  However it does not detail the source or level of external funding and neither does it cost the use of staff time. 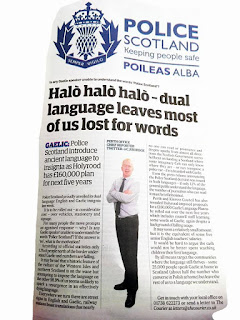 That is what is proposed for the next five years and you can imagine what the next plan will produce for the subsequent five years.  This time the business card has a bilingual logo - the next logical step would be a fully bilingual card with Gaelic on one side and English on the other.

So is everyone in Scotland happy with these developments?  Clearly not as this newspaper article from Dundee demonstrates.

Most Scots will already be familiar with the Scots word 'polis' which is the Scots translation of police but the Gaelic 'poileas' will be unfamiliar to most folk.

And of course since Scotland has three languages, English, Scots and Scottish Gaelic, it seems that Scots is being overlooked once again.

Posted by Nelson McCausland MLA at 11:40