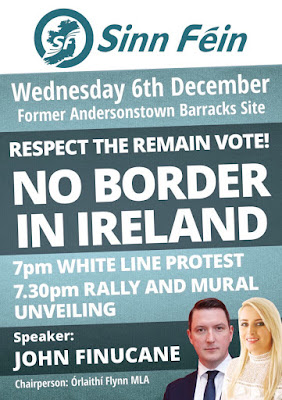 This poster marks the start of a new campaign by Sinn Fein against Brexit.

Of course since Sinn Fein collapsed the Northern Ireland Assembly and since they don't take their seats in the United Kingdom parliament at Westminster there isn't very much they can do except stand in the middle of the road in West Belfast on a cold December night and watch the cars driving past..

However I must say I was rather disappointed.  I thought Sinn Fein would have concentrated on a modern, state-of-the-art, social media campaign.

As we prepare to move into 2018 the white line protest seems rather old-fashioned.

Indeed with a white line protest, a rally and a mural, the only thing missing from the Andersonstown protest was that other old fashioned activity, the banging binlids, but then with these new plastic bins it's much harder to get a decent binlid these days.

I suppose too that a binlid protest doesn't fit in with the new suave image being cultivated by Sinn Fein, but then neither does a white  line protest and neither does having an MEP who advises a government leader to 'stick it where the sun don't shine'.

It was also noticeable that the main figures advertised for the rally were two of the newer faces of Sinn Fein, John Finucane and Orlaithi Flynn MLA.  As a result the people attending the rally seem to have been denied the opportunity to savour the oratorical skills of West Belfast MP Paul Maskey.

It also suggests that the ground is being prepared for John Finucane to have another outing for Sinn Fein in North Belfast where he was beaten decisively by Nigel Dodds in June.
Posted by Nelson McCausland MLA at 07:13