Stephen Foster - the songwriter and the statue 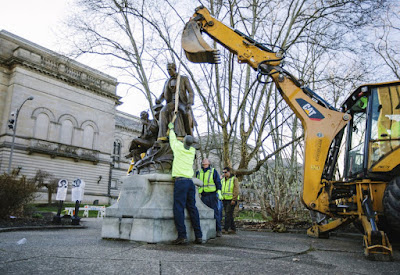 A statue of the Scotch-Irish songwriter Stephen Collins Foster (1826-1864) has been removed from a public park in Pittsburgh.  Workmen moved in on 26 April 2018 to remove the statue and put it in storage,

Stephen Foster has been described as 'the father of American music' and he was the author of such songs as Hard Times Come Again No More, Beautiful Dreamer and I Dream of Jeanie with the Light Brown Hair.

Many of his songs have been popular down through the years and are still popular today, more than 150 years after his death.  Beautiful Dreamer was recorded by both Bing Crosby and The Beatles and Hard Times Come Again No More has been recorded by many singers including Bruce Springsteen, Bob Dylan and Emmylou Harris.


So why has the city's Art Commission decided to remove the bronze statue of Foster been removed?  The main objection to it seems to be that it depicts Foster standing with a black American sitting at his feet strumming a banjo.  Critics have described it as racist and demeaning to black Americans while supporters have argued that it depicts Foster gaining inspiration from a black musician.

Foster was certainly a man of his time and wrote in the vernacular of his time.  As a result some of his songs contain words that today would be regarded as derogatory but he is also credited with being one of the first composers to dignify and humanise black folk through his songs.  He was not a racist and indeed he was an abolitionist but that was not good enough for the zealots who demanded the removal of the statue.  They kept up their campaign and in the end the Pittsburgh Art Commission caved in. 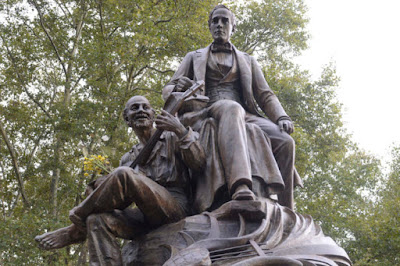 The statue  will remain in storage until a permanent home for it is identified.  The Pittsburgh mayor Bill Peduto has stated that he wants it moved from council-owned property to private property but the city has yet to find a taker.

Well if the city fathers are unable to find a suitable location in Pittsburgh perhaps there could be a new home for the statue on this side of the Atlantic, in the Ulster homeland of his ancestors.

The Foster family were very much aware of their roots in Ulster and Stephen Foster's older brother Morrison Foster (1823-1904) was a member of the Scotch-Irish Society of America.

Their father William Barclay Foster (1779-1855) was born in West Virginia and became a prosperous merchant in Pittsburgh.

Their grandfather James Alexander Foster (1738-1814) was born in Lancaster County, Pennsylvania, and served in the American War of Independence as a private in the Liberty Company of the Londonderry Volunteers.

The first of the Foster family to arrive in America was Alexander Foster (1710-1767), who was born in Ulster, into a family of Presbyterian Ulster-Scots, and then emigrated from Londonderry to America.

Some years ago The Playhouse in Londonderry staged a play about the life and work of Stephen Foster and I had the opportunity to meet the author of the play and some of the cast during a visit to The Playhouse.  I also enjoyed a performance of the play when it was performed in Belfast.

The play was written by local playwright Martin McDonald who said, 'His grandfather, Alexander Foster, emigrated from Derry in 1735.  He is an important part of the history of this city and we are keen to celebrate his connection.'

So if the city of Pittsburgh is looking for a new home for the statue, perhaps it could be donated to the city of Londonderry, from which Foster's great-grandfather had emigrated.

Meanwhile back in America Stephen Foster will continue to be remembered through his songs.  Though he died at the age of thirty-seven he left a considerable body of work, more than 200 songs, and the Library of Congress has described him as 'one of America's principal and most influential songwriters'.


Posted by Nelson McCausland MLA at 14:52