The Sunday Life newspaper, a sister paper to the Belfast Telegraph, reported that on Saturday there were 5,000 people on the march in Belfast for so-called 'Same Sex Marriage'.

Some observers have set the figure at just a few thousand but even if we were to accept the 5,000 figure, how does that compare with the expectations of the march organisers?

According to the Parades Commission website, the march was organised by Love Equality and the Irish Congress of Trade Unions and the organisers informed the Commission that they expected 15,000 participants. 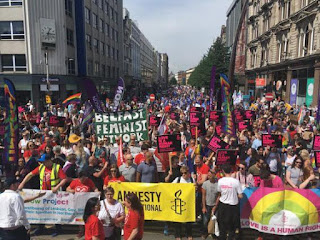 The fact that they only managed to garner 5,000 marchers, one third of what they had expected, must have been a major disappointment to Love Equality, which is a consortium of Amnesty International NI, the Rainbow Project, the Irish Congress of Trade Unions, Here NI, Cara-Friend and NUS-USI.

They will put on a brave show of it but to manage just 5,000 marchers, even when they had the support of other organisations such as the Belfast Feminist Network, must have been a great disappointment.

Posted by Nelson McCausland MLA at 13:42