The Ulster Hall was packed to capacity on Thursday night for the inaugural Festival of Marching Bands.  The event was sponsored by the NewsLetter and organised by Quincey Dougan, chair of the Ulster Bands Forum.  The compere was Dan Gordon, who was in great form, especially in his alter ego of 'Red Hand Luke' and the programme was sponsored by the Ulster-Scots Agency.
This was marching band music at its best with four bands performing in each half of the programme.  Cookstown Sons of William Flute Band, Gertrude Star Flute Band, Church Hill Silver Band from Fermanagh and Ballykeel Loyal Sons of Ulster Flute Band performed in the first half, while Mourne Young Defenders, Kilcluney Volunteers Flute Band from Markethill, William King Memorial Flute Band from Londonderry and Dunloy Accordion Band performed in the second.
The following short paragraphs are taken from an introduction which I contributed to the official programme:
Northern Ireland is a musical nation and music in its many forms permeates our history and culture.  It is a soundtrack to our lives.
We have a wealth of musical talent here and huge numbers of musicians develop their skills through practice and performance with marching bands. 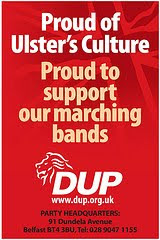 There is a long tradition of marching bands in Ulster and the Churchill Flute Band from Londonderry is our oldest band, having been formed in 1835.  In the programme there was a good account of the history of Ulster's marching bands and it ended with this assessment:
Today in Northern Ireland there are over 600 bands encompassing Melody flute, Blood and Thunder Flute, Silver, Accordion and Pipe, and the movement and styles have been exported around the world including Scotland, England, Canada and Australia.  An ever developing and growing scene, 11 new bands have been formed in 2009 alone, the Ulster Marching Band movement can count itself as one of the most vibrant and unique cultural and musical groups in the world.
Posted by Nelson McCausland MLA at 16:52