Up in the North-West

On Friday I travelled up to the North-West for a series of meetings and events.
The first was a visit to the Sollus Ulster-Scots Centre at Bready in county Tyrone to see their building and hear about the range of activities that go on there, both cultural and community.  We were met by James Kee, secretary of the Bready and District Ulster-Scots Development Association, and other committee members.  The activities there include the Bready Ulster-Scots Pipe Band, which has been in existence for 80 years, and the Sollus Highland Dancers.

From there I travelled across the border into Donegal to visit the Monreagh Ulster-Scots Centre.  The centre has been developed in a former Presbyterian manse, opposite Monreagh Presbyterian Church, and was opened on 28 May 2009.  The exhibitions relate to the history of the Ulster-Scots community in the Laggan area and the emigration of Ulster-Scots to America.  Among those I met were Jim Devenney, chair of the centre, his daughter Jackie Reed, who is a member of the board of the Ulster-Scots Agency, and Rev David Latimer, who is the Presbyterian minister at Monreagh. 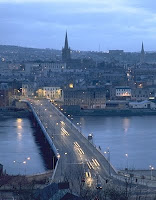 Later I visited the An Gaelaras Irish language centre in Great James Street in Londonderry.  The centre has now been renamed Culturlann Ui Chanain and incorporates classrooms, conference facilities, a youth club, a 200 seat theatre, a bookshop, a craft centre, cafe, business incubation units and office space.  I tend to prefer more traditional buildings but the architects must be commended for their contemporary design.
From there I travelled across to the historic 1st Derry Presbyterian Church in Upper Magazine Street, where I was welcomed by the minister Rev David Latimer, whom I had met previously at Monreagh - he is minister of both congregations.  The church dates back to 1690 and was built as a reward from Queen Mary for the bravery of the Presbyterian Ulster-Scots during the siege of 1688-89.  Because of serious structural problems with the roof the congregation has been out of the building for the last seven years and has been meeting in Carlisle Road Methodist Church but it is planned that the building will be reroofed, restored and back in use by September 2011.  As part of the plan it is proposed to provide interpretation of the story of the Ulster-Scots in the city.
In the evening I took part in the opening of the new Playhouse Theatre in Artillery Street. The theatre was based in two former schools, both of them listed, and they have been retained and refurbished with the new building to the rear.  The whole project is a tribute to the vision and passion of Pauline Ross and her team and they describe the centre as 'arts and the community working together'.  In recent times there has been substantial investment in arts and cultural infrastructure in the area through the £4m set aside as the North-West Challenge Fund.  Among the developments through the fund have been the Nerve Centre, Verbal Arts Centre, the Gasyard, An Gaelaras, the Waterside Theatre and the Playhouse.  This investment has significantly enhanced the cultural life of the city.
Posted by Nelson McCausland MLA at 18:18