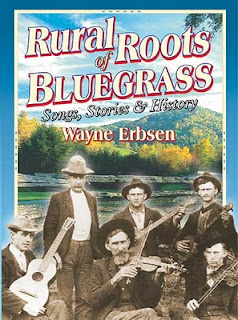 Back in 1973 Wayne Erbsen moved to Charlotte in North Carolina to dig deep into the roots of Southern Appalachian music.  Today he lives in Asheville and teaches music, as well as publishing books on traditional country music.  He also has his own weekly radio programme Country Roots.
In 2003, thirty years after he settled in North Carolina, Erbsen published Rural Roots of Bluegrass: Songs, Stories and History and this was his conclusion about the roots of such music:

Today some people say that it was the Irish who contributed most to Appalachian music and yes it was people who came from Ireland but they were Scotch-Irish, the descendants of the Ulster-Scots who crossed the Atlantic in search of a new life in a new land.
The book is available for purchase on the internet, along with a CD containing 14 songs from the book, and it is a great source of information about many traditional songs.  In 2006 Erbsen also published The Bluegrass Gospel Songbook, with more than 100 favourite gospel songs.
Posted by Nelson McCausland MLA at 20:07