In Search of Ulster-Scots Land

In recent years there has been an increase in interest in the contribution of the Ulster-Scots to the making of America and in 2008 Barry Aron Vann, associate professor of geography at Lincoln Memorial University in Tennessee, published a new volume entitled In Search of  Ulster-Scots Land: The Birth and Geotheological Imaginings of a Transatlantic People 1603-1703. 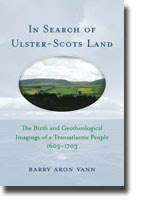 The book deals with both the movement of Scots to Ulster and then the movement of Ulster-Scots to America.  Five of the book's six chapters deal with the seventeenth-century formation of an Ulster-Scots cultural community and the author examines population statistics and geographical features to argue  that the sea between Ulster and Scotland served as a bridge rather than a barrier.

According to David P King, who reviewed the book for the Journal of Southern Religion:

Vann's interest goes beyond genealogy and geography. He argues that it is the religious thinking of the Ulster-Scots that shapes their unique culture. Diffused through their immigration to America, these beliefs have also left a significant cultural imprint on the South. Vann declares that the conservative belief system, political ideology, and landscapes of the Ulster-Scots are mirrored in the contemporary culture of the "Bible Belt."

This is a major contribution to the academic study of the Ulster-Scots and one that should be on the bookshelves of Ulster-Scots enthusiasts as well as libraries in Northern Ireland.
Posted by Nelson McCausland MLA at 03:36