The Barbour family of Hilden 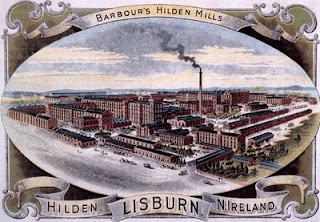 Plans have just been announced for a £100m regeneration scheme that will transform an abandoned textile mill in Lisburn.  The scheme, announced by Environment Minister Edwin Poots,  will provide 600 new homes, office and light industrial units, as well as a leisure complex and a museum that will  focus on the history of the linen industry.
The mill belonged to the Barbour family who came from Scotland in 1784.  In that year John Barbour set up a linen thread works in Lisburn, while his son William bought a derelict bleach green at Hilden.  Later the thread works moved from Lisburn to Hilden and by 1817 it was employing 122 workers.
In 1823 William Barbour bought a former bleach mill at Hilden and built a water-powered twisting mill.  The Barbour Linen Thread Company was foudned in 1898 and became the largest linen thread mill in the world.  By 1914 it employed about 2,000 people and the company built a model village for the workers, with 350 houses, two schools, a community hall, children's playground and a village sports ground.  However the linen indutry in Ulster declined and the mill finally closed in 2006, by which time the workforce had dwindled to just 85.
The story of the Barbour family is just another strand in the story of Scottish and Ulster-Scots businessmen who helped to make Ulster such an industrial powerhouse.  Other include shipbuilders such as William Ritchie and Sir George Clark and the Mackie family who had a major engineering business in Belfast.  This is a story that deserves to be explored more thoroughly.
Posted by Nelson McCausland MLA at 01:06