No more Sunday games for Murray 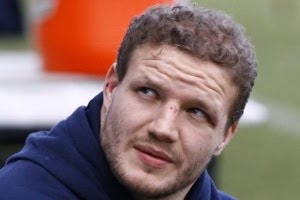 Scottish rugby international Euan Murray is to sit out Scotland's opening RBS 6 Nations match against France at Murrayfield on 7 February because the game is being played on Sunday.
Murray was converted in 2006 and later said, 'I heard the gospel which is the good news that Jesus Christ died for our sins and realised that I had to believe that with all my heart.'  Since then he has played some games on Sunday but earlier this year he admitted that he had been wrestling with his conscience over the issue and after studying and praying he had decided not to play on Sundays.
Scottish coach Andy Robinson said, 'Euan has said he will not play on any Sunday and will give himself to God on that day. He believes it. For some of us it is not what we do, but we are not Euan Murray. We must respect his choice.  He is saying that through his reading and his beliefs, he has come to the conclusion he does not want to play rugby on Sundays.’
Euan Murray, who is a Baptist lay preacher, is to be commended for his public stand for his faith.  There is undoubtedly tremendous pressure to fit in with the spirit of the age and ignore the fourth commandment but Jesus said, 'If ye love me, keep my commandments.'  John Wesley had a seal with the words on it, 'Believe, love, obey' and that sums up the Christian life.  As John Blanchard once said, 'Obedience is not the essence of a right relationship with God but it is the evidence of it.'
This reminds us of another Scottish sportsman, Eric Liddell, who refused to run on a Sunday at the 1924 Paris Olympics.  His story was later retold in the film Chariots of Fire.
Posted by Nelson McCausland MLA at 15:28