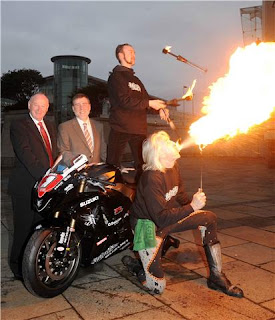 Today was a very busy day with departmental and other political commitments.

The morning started with the media launch of the NorthWest 200 motor cycle race, which takes place in May and attracts around 150,000 spectators.  This is the largest sporting event in Northern Ireland and a major element in the road racing calendar.

It was good to hear that the event has secured a new sponsor for this year and that the future of the North West 200 looks very bright.  There is an excellent programme of road races over the summer months and along with it there is the potential to market Northern Ireland as the road racing capital of the world. 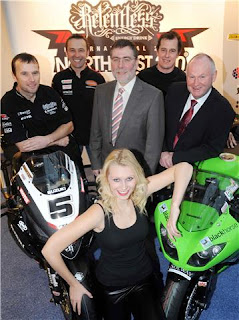 In the afternoon I had to make a statement in the Assembly on the last North-South meeting about Waterways Ireland.  This was followed by questions and in answering these I reported that the planning stage is underway for the restoration of part of the Ulster Canal, from Clones to Upper Lough Erne.  I was also able to report some good news about the provision of additional moorings on the Lower Bann.

Later this evening I spoke at a reception at Stormont for the Northern Ireland Olympic Skeet Shooting Team, to mark their success in winning the home international tourament, which was held in North Antrim in August 2009.  The team were delighted about their victory over England, who have dominated the tournament for the past 20 years.  It was a very enjoyable reception and a good oppotunity to talk to the team members and hear about some of the issues they face in developing the sport.
During the day there were various other party meetings, departmental meetings and media interviews, including Stormont Live and Primetime on RTE.
Posted by Nelson McCausland MLA at 16:18