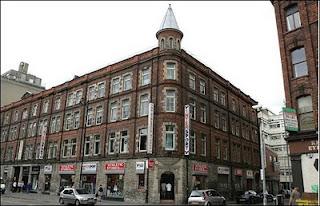 A High Court judge in Belfast has quashed the decision by the Planing Service to permit the demolition of a historic Victorian building in Belfast city centre and replace it with apartments and shops.
The intention of the developer was to demolish the Athletic Stores and make way for a nine-storey complex with 69 apartments, street-level shops and basement parking facilities.
Although the developer got planning permission the process and the decision were challenged by the Ulster Architectural Heritage Society, who argued that the planners had ignored the views of the departmental conservation officer who concluded that the loss of the warehouse would harm what is a conservation area.
We have lost too many fine old buildings, which help to create the character of an area, and this building is singificant because of its use, as a linen warehouse, its interesting design, and its architects, Young & McKenzie, who were responsible for some of the finest buildings in Belfast and across Ulster.  They also designed the Robinson & Cleaver building opposite the City Hall, the Thompson Memorial opposite the BBC in Ormeau Avenue, the Presbyterian War Memorial building and many Presbyterian churches.

The firm was originally set up in Belfast by Robert Young (1822-1917) and John McKenzie (1844-1917).  One of the members of the Young family, Robert Magill Young, was an antiquarian as well as an architect, and in 1892 he produced The Town Book of Corporation of Belfast 1613-1816.  This important volume was reprinted by Belfast City Council about a year ago.
Posted by Nelson McCausland MLA at 08:53