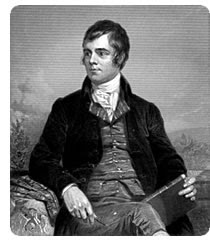 The 18th century Scottish poet Robert Burns (1759-1796) is the national poet of Scotland and one of the best -loved poets of all time. The son of an impoverished farmer, he began to write poetry in 1774 and published his Poems, Chiefly in the Scottish Dialect in 1786. Thereafter he lived a dual life as a tenant farmer and a prolific poet. In 1789 he took a post in the excise service and moved to Dumfries in 1791. There he composed many ‘occasional’ poems and many of the folk songs published in James Johnson’s Scots Musical Museum (1787-1803) and George Thomson’s Select Collection of Original Scottish Airs for the Voice (1793-1818).
A few days before he died in 1796 Burns said to his wife, ‘Ay, Jean, They’ll think much more of me a hundred years after this.’ That prophecy was certainly fulfilled. Burns had little formal education and he died before he was 38 years old but the centenary of his death was marked in many lands and today, two hundred years after his death, he is loved by millions of ordinary people all over the world.
The Russians have a very fine translation by the great Russian poet S Marshak and in 1959 an anthology of Burns’ poems was translated into Chinese. Burns has an international appeal. As Rev J A Carruth put it in A Humble Tribute to Robert Burns, ‘He speaks to Scots; he speaks to a’.’
Posted by Nelson McCausland MLA at 18:39