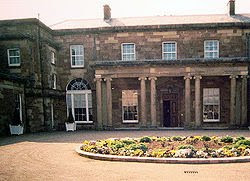 Hillsborough Castle has been in the news as the location for inter-party talks.
It was built in the 1770s by Wills Hill, the first Marquis of Downshire.  The first member of the family to come to Ulster was Sir Moyses Hill (d 1630), who came to Ireland as a soldier under the Earl of Essex.

The house remained in the family until 1922 when it was sold to the United Kingdom government and became the home of the governor of Northern Ireland.  The first governor, the Duke of Abercorn, moved into the castle in 1925 and he was followed by four more governors until the post ended in 1972.
1. James Albert Edward Hamilton, 3rd Duke of Abercorn (12 December 1922–6 September 1945)
2. William Spencer Leveson-Gower, 4th Earl Granville (7 September 1945–1 December 1952)
3. John de Vere Loder, 2nd Baron Wakehurst (1 December 1952–1 December 1964)
4. John Erskine, 1st Baron Erskine of Rerrick (1 December 1964–27 November 1968)
5. Ralph Francis Alnwick Grey, Baron Grey of Naunton (27 November 1968–26 June 1973)
Today Hillsborough Castle is the used by the Secretary of State and by royal visitors to Northern Ireland.  The gardens are very attractive and in them is Europe's largest rhododendron bush.
Posted by Nelson McCausland MLA at 19:25