Academics from the University of Aberdeen have been given a £334,000 grant to examine the depositions of English and Scottish settlers about the masscre of Protestants in Ulster in 1641.  The 4,000 depositions are held in Trinity College Dublin and describe the events of that terrible time.  The historians will use cutting-edge software to examine and cross-reference names, places, words and phrases in an effort to establish just how many people were murdered.  The most recent estimates put the figure at between 4,000 and 12,000.
There can be no doubt that the Irish rebels had a sectarian motivation.  Writing on 7 December 1641 Father Hugh Bourke, at that time commisary of the Irish Friars Minor in Germany and Belgium, admitted that the war was ‘begun solely in the interest of the Catholic and Roman religion’.
[Jesuit Plots p 163; Report on Franciscan Manuscripts, Command Paper 2867, HMSO 1906]
Indeed the fact that this was a Roman Catholic rebellion against Protestantism was acknowledged by the Jesuit writer Oliver P Rafferty in his history of Roman Catholicism in Ulster: 'The bloody Ulster uprising of 1641 ... represented ... a spontaneous outpouring of hatred against Protestantism and all it stood for.' [Catholicism in Ulster 1603-1983 p 1] 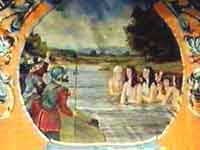 But what was the extent of the massacre?  In the past there were grossly exaggerated figures but even if it were only 4,000 or 12,000 people it was still a dreadful massacre and left a dreadful legacy of hatred and fear.
Even the lower figure of 4,000 is greater than the number of people killed in the recent Troubles in Northern Ireland and yet the killing happened at a time when the Protestant population of Ulster was much smaller, around 100,000.  Furthermore it happened in a much shorter period and in addition to those who were murdered, many others died as a result of ill treatment and deprivation.
The respected Ulster historian Dr A T Q Stewart once said that ’The 1641 rebellion is perhaps the most important episode in the history of Ulster since the plantation, yet it is one of the least discussed.’  Perhaps this new research will help to focus attention on that 'important episode'.
The massacre certainly had an important place in the history of the Ulster-Scots and not just because of its impact on the relationship between the Scottish settlers and the native Irish, who were Roman Catholics.  It also led to the arrival of a Scottish army in Ulster in April 1642 to protect the Scottish settlers and on 10 June the chaplains of the Scottish army formed their own presbytery.  This was the start of organised Presbyterianism in Ulster and it became the General Synod of Ulster.
Posted by Nelson McCausland MLA at 12:09