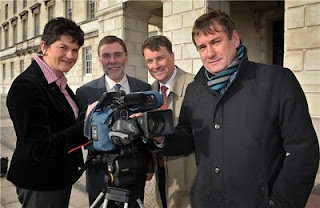 Arlene Foster (DETI minster), Nelson McCausland (DCAL minister), Rick Hill (NI Screen) and Mark Huffam (producer)
Today it was announced that HBO have agreed to film the series Game of Thrones in Ulster.  The company is the premier producer of television drama and this will raise the profile of Northern Ireland as a film location.
HBO intend to produce a ten part television series of each of George R R Martin's award winning novels and it is expected that each series will be one year in production, with an overall budget for each series of around £30m.
With at least seven books in the series this is a major success for Northern Ireland Screen, who have done so much to develop Northern Ireland as a location for film production.  Rick Hill (chair), Richard Williams (chief executive) and their team deserve great credit for their efforts.
This is a great boost for the creative industries in Northern Ireland and shows that we are able to compete and succeed on the world stage as regards film production.

Back in November 2009 I visited the set during production of the pilot episode at Castle Ward and Northern Ireland is well placed to secure more film production in the future.  It is competitive in termso f cost and has a wide range of natural locations as well as the Paint Hall facility in Titanic Quarter.

Producer Mark Huffam was born in Ulster and his CV includes production credits on films such as Saving Private Ryan.  He was also the producer of the Abba-themed musical Mamma Mia!
Posted by Nelson McCausland MLA at 12:59