I travelled up to the North Coast today for the 2010 Relentless International North West 200 Race Day.  As well as watching some of the races from the paddock I visited the BBC complex, the media centre and the emergency services, and was able to view one of the races and see the entire course from a helicopter. 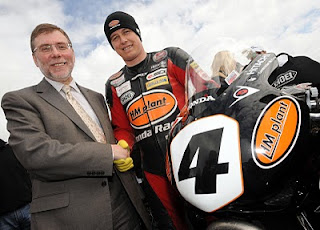 Sports Minister Nelson McCausland on the grid with motorbike racer John McGuinness. McGuinness went on to win the Superbike race at the annual sporting spectacular.
This is the largest annual sporting event in Ulster and indeed in Ireland and the organisation behind it is extremely impressive.  Great credit must go to the race director, Mervyn Whyte, and his staff and team of volunteers.
The North West 200 shows that Northern Ireland is capable of hosting and organising world class events at the highest possible standard.  Each year this event draws more than 100,000 people and depending on various factors it can even reach up towards 150,000.  I saw visitors today from many countries around the world and such events are an important boost to the local economy.
The Northern Ireland Executive provides support through DETI and DCAL, for promotion and for safety.  Every year the organisers improve the safety of the course and this year, for example, a chicane was added at Mathers Cross and improvement works were carried out at Station Corner.
Such is the popularity of road racing in Northern Ireland that with ongoing support, with the leadership of Mervyn and his team, and with the dedication of the volunteers, the North West 200 can go from strength to strength.  Moreover with events such as this and the Ulster Grand Prix there is no reason why Northern Ireland cannot be the 'road racing capital of the world'.
Posted by Nelson McCausland MLA at 12:06