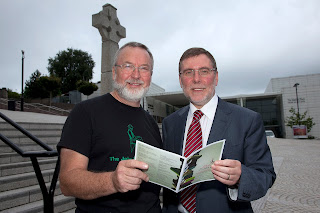 The 23rd John Hewitt International Summer School runs throughout this week in the Market Place Theatre and Arts Centre in Armagh.  Among the well-known writers appearing at this year’s Summer School are Michael Longley, Louis de Bernières, Eavan Boland, top American poet, Sharon Olds, Terry Eagleton, Joseph O’Connor, Glenn Patterson and Blake Morrison.
I travelled down to Armagh to open the Summer School and was welcomed by the director Tony Kennedy OBE.

Im ,y speech I referred to Hewitts' book on Rhyming Weavers, which was published in 1974 and did much to stimulate interestin the country poets of antrim and Down, especially the rhyming weavers, many of whom wrote in Ulster-Scots as well as English.  The book was republished in 2004 with an introduction by Tom Paulin.  At the end of the introduction Paulin said:

John Hewitt's anthology, re-issued here, initiated a process of cultural recovery and restitution which needs to be constantly recognised and encouraged.

I was impressed by that phrase 'cultural recovery and restitution'.  Some important element of our culture and history in Ulster has been marginalised or forgotten, especially by what I sometimes call the cultural elite or the cultural establishment.  That is why the Ulster-Scots revival is so important.  It is recovering a 'missing strand' in our cultural diversity.
Posted by Nelson McCausland MLA at 01:54