Is there no place for 'gospel music'?

Last night I attended a Celebration of Old Time Gospel Music at the Theatre at the Mill in Newtownabbey. Some call this 'country gospel' and some call it 'southern gospel' but everyone who loves 'old time gospel music' knows what it is and at the heart of it is the simple message of the Christian gospel, presented in a particular musical style.
The theatre was filled to capacity and the audience enjoyed a great evening of gospel music.  One of the singers, George Hamilton IV, was from North Carolina and another, Donny Richmond, was from Tennessee and both are well known in the field of country gospel.  George Hamilton IV is a regular at the Grand Ole Opry in Nashville but he concentrates mainly on gospel tours at home and abroad. 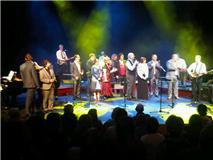 The other singers were all from Northern Ireland - Kathryn Mitchell, Live Issue, Chapter 7, Simple Faith, Joy Boyd and Gillian Adams - and the music and the singing were excellent.  The evening illustrated the interest in gospel music in Northern Ireland and also the high standard of some of our local performers.  For example, Live Issue are from around the Banbridge area and they have performed at the Grand Ole Opry in Nashville. In 2007 they collaborated with George Hamilton IV to record a live album based on the life of Joseph Scriven, the Ulsterman who wrote the hymn What A Friend We Have in Jesus.
The previous night I attended the opening of the Ulster Bank Festival at Queen's and will be attending a number of events during the festival.  It runs from for two and a half weeks from 14 to 31 October and there is a diverse programme that caters for a wide range of genres of music.  There are a number of classical music events, and there is provision for jazz, folk and country, country and Irish, with Hugo Duncan, Irish traditional music, with Anuna in Clonard Monastery, afro-beat, eastern and new wave, as well as several contemporary singer songwriters with rather eclectic styles.
However a genre that I and many others enjoyed last night in Netownabbey, and which is immensely popular in Northern Ireland, is totally missing from the programme.  The Dublin Gospel Choir is performing in May Street Presbyterian Church but their music is of a very different type.  So is there a place in our cultural life in Northern Ireland for 'old time gospel music' or is there not?
I asked the same question recently in relation to Belfast Music Week, which totally ignored Christian music, and so the Festival is not the only programme to omit the 'old time gospel music' which is so popular in Ulster.  If the Festival can find a place for a local country singer such as Hugo Duncan, can they not find a place for local gospel singers such as Kathryn Mitchell or Live Issue?
However recently, when I visited North Carolina Museum of Art, I was interested to hear from the deputy director that the museum is in the American Bible belt and that in its programming it takes account of that community and seeks to accommodate that community through its events.
I do not detect in Northern Ireland the same willingness to reach out to the evangelical Christian community.  It tends to be pushed into the margins and ignored but why does that happen?  I would suggest that it is because there are not many evangelical Christians in the 'cultural establishment' and therefore it is easy to create a cultural consensus that ignores the culture of that sector of society.
Ulster has a strong Christian heritage and it has a very strong evangelical Christian heritage.  Yes we live in what is at present an increasingly secular age but there is still a large evangelical community and it deserves to be accommodated within the cultural life of Northern Ireland.  The first step would be for the organisers of major cultural programmes to engage with the evangelical Christian community, to talk to them, to find out about them and to listen to them.
I have already spoken to one of the officers in Belfast City Council about Belfast Music Week and I hope that as soon as the Festival programme for this year is over, the organisers will start a conversation with those involved in gospel music in Northern Ireland with a view to incorporating some of that music in their programme next year.
Posted by Nelson McCausland MLA at 07:51