The birth of Presbyterianism in Ulster

The following brief account of the birth of Presbyterianism in Ulster is taken from a commemoration sermon preached by Rev Professor R L Marshall in First Presbyterian Church in Carrickfergus on the afternoon of 10 June 1942.  This was the start of a commemoration to mark the 300th aniversary of the founding of the first presbytery in Ulster.  R L Marshall was a professor at Magee University College in Londonderry and a brother of Rev W F Marshall, the 'Bard of Tyrone'. 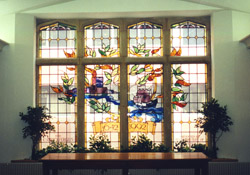 Presbyterianism came to Ireland before the Ulster Plantation but it was weak and unorganised.  From 1613 until 1630 it grew apace, and its ministers and members were tolerated and accepted by the Established Church under the mild rule of Archbishop Ussher.
Then across the sea, in the Church of England, a party became supreme which was wedded to the doctrine of the Divine Right of Kings, and determined to stamp out Presbytery and Puritanism from the Church, both in England and Ireland.  Laud became Archbishop of Canterbury.  The Irish bishops went with the tide; and when Wentworth, the willing tool of [King] Charles, came to Ireland, Presbyterians were no longer permitted to minister or worship in the fold of the Established Church.  A golden opportunity for the union of Irish Protestantism passed, and Presbyterian ministers were driven out.  The Black Oath followed, with its brazen denial of the rights of conscience, and the gaols opened their doors to many of the Ulster Scots.  Others of them fled back to their native land.

After the Rebellion and Massacre of 1641, by an arrangement made between the Scotch and English Parliaments, a Scotch army, ten thousand strong, was sent to Ireland for the protection of the Irish Protestants.  Four kirk-sessions were organised in this army, and it was then determined to form a Presbytery according to the discipline of the Church of Scotland.  On the 10th of June, 1642, that Presbytery, consisting of four ruling elders and five ministers, was constituted here in Carrickergus.

On the 350th anniversary of that first presbytery the Carrickfergus Window was installed in Church House in Belfast.  The window depicts a ship arriving from Scotland to land at Carrickfergus, which is represented by the 11th century Anglo-Norman castle.
Posted by Nelson McCausland MLA at 14:45