The Vennel is the name of a narrow street in the Antrim coast village of Glenarm. 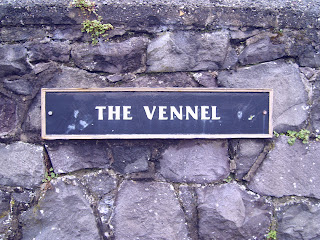 The Dictionary of the Scots Language defines a vennel as 'a narrow alley or lane between houses'.  It notes that the word still occurs frequently in street names in many Scottish towns, such as Edinburgh, Ayr, Dumfries, Forfar and Perth.  The word also occurs here in Ulster, in Glenarm and in Bangor.  There may well have been other examples and it was certainly used at one time in Strabane.
This is another Ulster-Scots word we do well to preserve and use.
Posted by Nelson McCausland MLA at 11:48