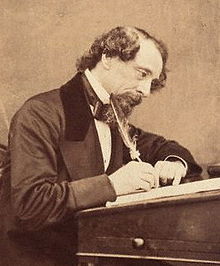 Last night (25 January) there was an article in the Belfast Telegraph on the visits to Belfast by the English author Charles Dickens.  This was connected to the fact that this year is the 200 anniversary of the birth of Charles Dickens in 1812.

It was a very interesting article but it omitted one of Dickens' most perceptive comments about the town.  After his first visit to Belfast in 1858 he wrote: 'Tremendous houses, curious people.  They seem all Scotch, but quite in a state of transition.'
Dickens recognised the strong Scottish influence in Belfast, something which was recognised by many other visitors in the 218th and 19th centuries.
When the French aristocrat Le Chevalier de la Tochnaye visited in 1797 he said, 'Belfast has almost entirely the look of a Scotch town and the character of the inhabitants has considerable resemblance to that of the people of Glasgow.'
Moreover the people of Belfast still spoke Ulster-Scots.  When Amyas Griffith came to Belfast in 1780 as Surveyor of Excise he noted that 'the common people speak broad Scotch'.
The observation by Dickens that the people 'seem all Scotch' was noted in the magazine of the Ulster-Scots Language Society (winter 2004), which included an excellent article by Dr Philip Robinson entitled 'Charles Dickens, Belfast and the Ulster-Scots'.
Posted by Nelson McCausland MLA at 16:20