Margaret Ritchie remained in the post of Social Development Minister, as well as SDLP leader, until May 2010, when she was returned to Westminster as the MP for South Down.  At that point she gave up the ministry and on 25 May 2010 she handed it on to Alex Attwood MLA from West Belfast.
The following year was the year of the Northern Ireland Assembly election and so it was time for the SDLP to use Girdwood again for some party political publicity.  Ritchie had announced 200 houses for Girdwood and so on 14 March 2011 Attwood simply made the announcement for a second time - even though he knew that he could not deliver on it without cross-community agreement and there was no such agreement.
The headline of the press release was 'ATTWOOD REVEALS PLANS FOR HUNDREDS OF HOMES ON GIRDWOOD FORMER MILITARY BASE'.

This £20million investment will be one of the biggest new social and affordable housing developments in Northern Ireland in recent years. It will also provide the best opportunity in a generation to make real progress in meeting housing need across North Belfast.

Alex Attwood said: “This will be a tremendous housing boost for the people of North Belfast. My predecessor has already announced a £38million investment to transform the quality of homes in north Belfast. I am now adding quantity to that quality with 200 new social and affordable homes at the former military base at Girdwood. Windows and washing lines replacing watchtowers and sangers offers a much brighter future for everyone in the area.

“We appointed Apex Procurement Group some months ago to start the ball rolling. They have produced high quality designs with a proposed layout for the new homes. The time is now right to share those plans and consult with the local community.” 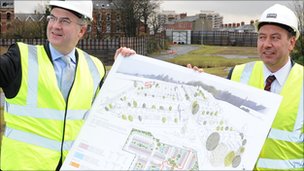 Alex Attwood then arrived on site at 11.00 am and was photographed with a map showing his plan for Girdwood.  It was a plan to fill the site with social houses and abandon the agreed vision for a mixed use site.

The first announcement of the 200 houses was made by Margaret Ritchie during her bid to become leader of the SDLP and the announcement of the same 200 houses by Alex Attwood was made while he was preparing to contest the 2011 Assembly election.  Moreover he was photographed on the site with his party colleague Alban Maginness who was also preparing for the Assembly election.  Once again the SDLP used Girdwood for electoral purposes.  Margaret Ritchie used it in the context of a leadership election and Alex Attwood used it in the context of the Assembly election.

However they were selling the electorate a meaningless vision and they knew very well that they could not deliver it.

Posted by Nelson McCausland MLA at 16:17